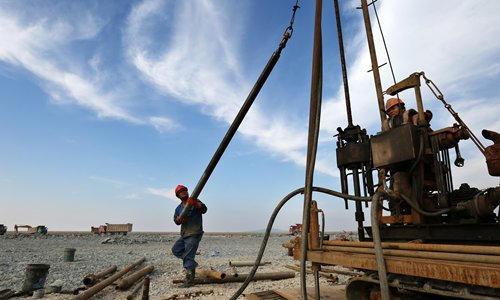 Workers at a construction site for a China-Australia industrial park in Zhoushan, East China's Zhejiang Province in May. (Photo: IC)

There have been signs recently pointing to improving economic ties between China and Australia, but Chinese officials are likely to remain cautious given Australia's previous habit of seeking economic gains from China while being critical of China on other issues, analysts noted.Relations between the two countries have been strained due to Australia's critical stance on China over a number of issues from security to geopolitics in the past year, but Australian officials have in recent days signaled their intention to improve economic ties, despite lingering problems in the overall bilateral relationship. However, analysts said that to pursue economic cooperation, Australia must adjust its increasingly hostile stance against China.In the latest development, Australian Foreign Minister Marise Payne has been invited to visit Beijing from Wednesday to Friday, the Chinese Ministry of Foreign Affairs announced on Monday.The visit will be the first by a top Australian official to China for several months, with bilateral relations having soured further after Australian officials accused China of meddling in its domestic affairs, which China vehemently denied. Australia also imposed restrictions on Chinese companies' business operations in the country, such as banning Chinese telecom company Huawei from taking part in the country's 5G development.During her visit in Beijing, Payne will meet with Chinese State Councilor and Foreign Minister Wang Yi to hold a new round of diplomatic and security talks, Hua Chunying, a spokesperson for the Chinese Foreign Ministry, said on Tuesday.But when asked whether the visit would "re-start" the China-Australia relationship, Hua reverted to China's long-stated position on the bilateral ties. "We have made clear China's principled position on developing China-Australia ties on many occasions," Hua said. "We stand ready to work with the Australian side to expand exchanges and cooperation across the board and move forward bilateral ties on the basis of mutual respect, equality and mutual benefit."Change neededJiang Yong, a research fellow at the China Institutes of Contemporary International Relations in Beijing, said that China should be cautious about Australian officials' "sudden olive branch.""I'm afraid that their hostile stance against China has not and will not change suddenly. This is more like a tactic aimed at gaining economic benefits from China while sticking with other Western countries in containing China," Jiang told the Global Times on Tuesday. Australian officials have spoken more positively about China in recent days, though they have mostly focused on economic ties.On Sunday, Australian Minister of Trade, Tourism and Investment Simon Birmingham broke with Australian officials' previously critical stance toward the China-proposed Belt and Road initiative (BRI). He expressed support for a deal between Australia's Victoria state and China on cooperation under the BRI."The Australian government welcomes the fact that through [the BRI] China is investing more across our regions," Birmingham said on the sidelines of the ongoing China International Import Expo in Shanghai."This is a breakthrough for a state government to make such a move. It is a positive turn by the Australian government," said Han Feng, a research fellow at the National Institute of International Strategy under the Chinese Academy of Social Sciences.Han also noted Australia's contradictory stance on China's rise regionally and globally. "On the one hand, they are concerned about China's rise, while on the other hand, they know they need China for economic development."According to a survey released by the China-Australia Chamber of Commerce on Tuesday, 80 percent of Australian companies operating in China said the strain in bilateral ties has had an impact on their business, while 56 percent said it has had a "direct negative impact" on their business. "So for economic ties to improve, Australia must also take concrete steps to improve the bilateral diplomatic relations," Jiang said.