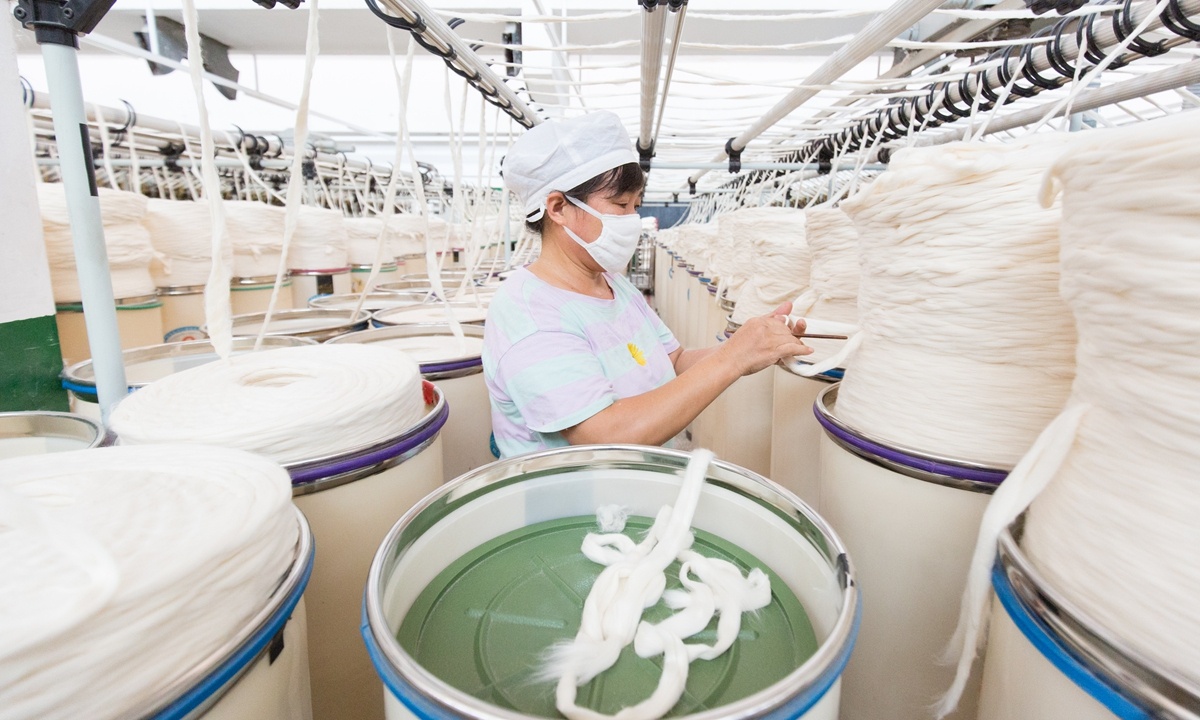 A cotton spinner is seen at work in a textile factory in East China's Jiangsu Province on October 10. (Photo: cnsphoto)

The Australian cotton industry may see "a devastating blow" since Chinese buyers had been told by Chinese authorities to halt purchase, Australia's ABC on Friday reported, citing government sources.

While China sees surging imports of cotton, Australian cotton may see weak demand due to its relatively high prices and strong substitutability, an industrial analysis on cncotton.com said.

"With orders bouncing back rapidly, we have been expanding cotton imports recently, with most from the US, Brazil and India," an employee at a Shandong-based spinning mill told the Global Times.

She said Australian cotton accounts for less than five percent of the company's raw materials, and was not included in the list of expanding purchases. She did not say why.

Data from China's National Development and Reform Commissions showed that China imported 140,000 tons of cotton in August, surging 54 percent due to the continuous recovery of production and consumption of textile goods.

US cotton accounted for as high as 72 percent of Chinese imports in August, according to the industry report, followed by imports from Brazil and India.

On the other hand, shipments to the Chinese market accounted for nearly 65 percent of Australia produced cotton, valued at AU$800 million ($567 million), ABC reported.

Yu Lei, the chief research fellow at the Research Center for Pacific Island Countries at Liaocheng University, slammed Birmingham, saying that "as a major cotton importer in the world, China has been making choices based on market principles."

Australia's agricultural products maintain high homogeneity with global rivals, including wheat, beef and cotton. And farmers in Australia have long complained of unfair competition from US rivals who enjoy government subsidies, Yu noted.

China has a huge demand for cotton, while Australia was not an important supplier, Yu said, stressing that China would take the interests of Australia into account when the two nations enjoy normal relations.

As Canberra has been recklessly deteriorating its relations with China, it should have foreseen the potential impact on its trade. And certain products will simply lose the market, Yu said.