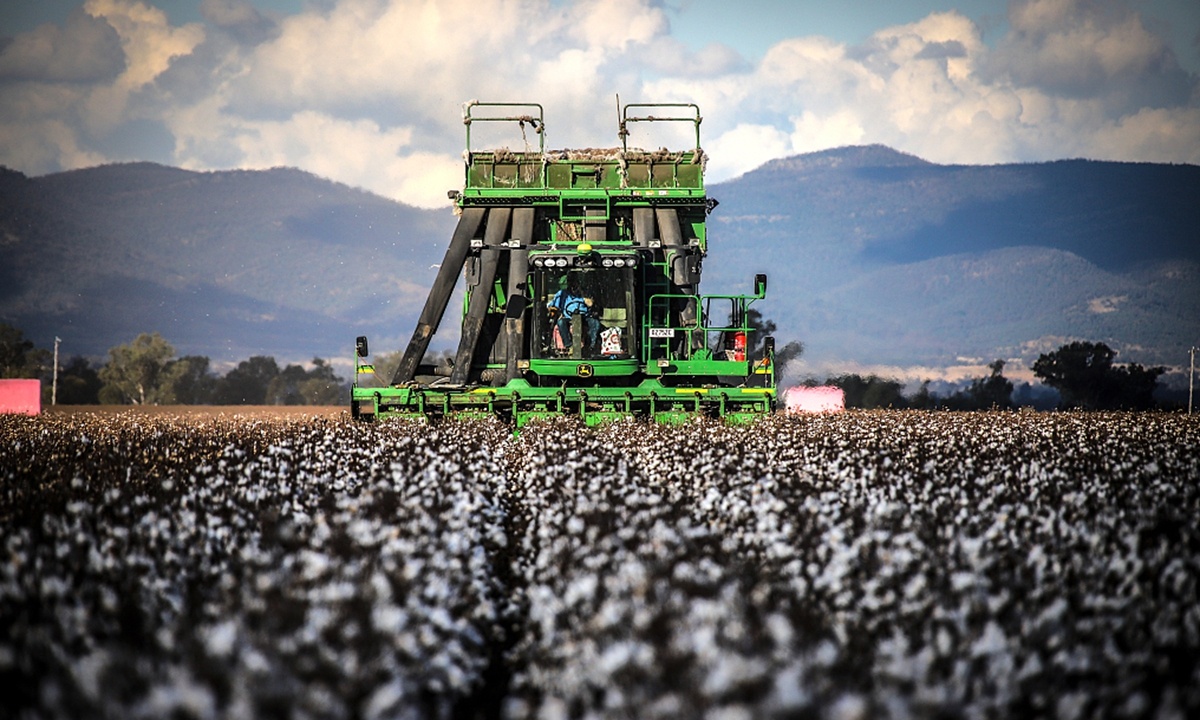 The quantity of Australian cotton that passed Chinese customs clearance remained low, while price quotation and purchasing were also sluggish for the commodity as Chinese businesses had become cautious about importing Australian cotton amid the two countries' cooling relations.

Experts said that Australian cotton is losing its once favored market status in China as demands soared for domestically produced cotton, particularly produced in Northwest China's Xinjiang Uygur Autonomous Region, which is of high quality.

In 2019 and 2020, the quantity of Australian cotton that passed customs clearance at major Chinese ports were low, and certain traders only had 1-3 containers of cotton to be sold, a report of Chinese cotton news portal cncotton.com said, citing port traders as saying. The report said that most Chinese traders and middlemen were cautious about purchasing Australian cotton.

A manager surnamed Chen, of a cotton trading agency based in Qingdao, East China's Shandong Province said that cotton imported from Australia has encountered problems with customs clearance in recent months and was at increased risk of being denied entry into China.

Data calculated by the China Cotton Association showed that the China's cotton import from Australia has been edging down since 2019, but the drop has intensified since 2020. Last year, China imported 40,170 tons of cotton from Australia in 2020, down 68 percent from 2019.

The association's statistics also showed that cotton imports from Australia have continued to slump this year. In the first four months this year, China imported 12,706 tons of cotton from Australia, down 68.4 percent on a yearly basis.

China was the top major destination of Australian cotton from September 2020 to March 2021, accounting at 36.5 percent of its total cotton exports.

The drop in China's imports of Australian cotton came amid increasingly fraying relations between the two nations. In 2020, China's imports from Australia decreased 4.6 percent on a yearly basis to 796 billion yuan ($123 billion), a Chinese customs spokesperson said in January.

Jiao Shanwei, editor-in-chief of cngrain.com, a website specializing in grain news, said that the cooling diplomatic relations has causedthe slumping exports of Australian cotton to China.

"Importers should be worried that China may impose anti-dumping and anti-subsidy duties on Australia cotton similar to barley, and shun the commodity's trade to prevent potential risks," he told the Global Times on Thursday.

Some Australian media reported that there is speculation that a hefty punitive tariff might be slapped on Australian cotton.

Chinese experts said that Australia is "eating its own medicine" for losing market share in China, not only as a result of the country's growing hostility toward China in policymaking, but also because its products have lost edge in terms of price or quality.

Wang Zhankui, a senior industry analyst, told the Global Times on Thursday that China's cotton has gained a reputation for being of high-quality, and can replace Australian imports.

"When we began to build cotton processing base, we had compared the features and quality of cottons from US, Pakistan and India, and finally we settled on Xinjiang cotton," said Huang. "The cotton from Australia didn't appear on our candidates list."

"As China is a major grower of cotton, changes in imports wouldn't affect the country's cotton consumption and supply much.If cotton imports from Australia plummet, we can increase cotton growing area in the country or import it from other destinations like Brazil or the Black Sea countries," Jiao said.