Australian salmon supplies to China gaining market share, but trend to be temporary 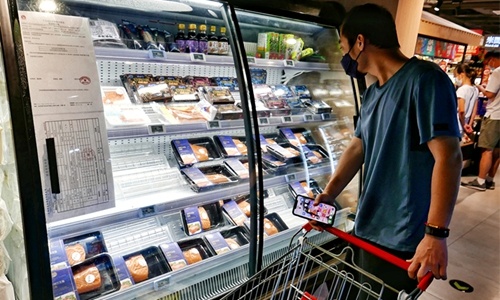 Australian salmon traders are benefiting from a gradual recovery of China's seafood consumption, despite souring relations that have disrupted sales of major Australian goods to China.

As one of the world's top seafood markets, China is the preferred export destination for global salmon producers. China's imports plunged after coronavirus was detected on a chopping board for imported salmon at a Beijing market last June. But they slowly picked up after effective epidemic prevention and control work helped restore market confidence.

While Norway and Chile remained the top sources of imported salmon to China, Australian salmon has also benefited from the rising trend since late last year because of a bilateral free trade deal that took effect in 2015, as well as proximity to China that means faster delivery at lower prices, industry experts said.

Weng Qiang, a purchasing manager at Sunkfa Holding Group, a leading Beijing-based seafood company, told the Global Times on Wednesday that there have been some rising imports of Australian salmon. He didn't provide specific figures.

The company's imports of Australian salmon have recovered 80 percent of the pre-epidemic levels, which is a significant amount compared with the 35 percent recovery of the overall salmon market, Weng said.

"Compared with other producing nations, salmon shipments from Australia often arrive faster because of the shorter distance. Sometimes it can take just two days, while it normally takes three to five days from Norway and five to seven days from Chile," said Weng. Cheap prices also count, industry insiders said.

China is Australia's largest export market for agricultural, fishery and forestry products, at A$16 billion ($12.2 billion) in 2019-2020. Exports to China are about five times larger than in 2000-2001, a report published on the website of the Department of Agriculture, Water and the Environment of the Australian government said.

Some commodity exports remain more concentrated toward a single market, which may be driven by prices or the composition of the global supply chain, the report also noted.

However, experts said that the boom in Australian salmon exports to China will be temporary, rather than a long-term trend.

"China has diversified sources of salmon, and Australia has a much lower production capacity than Norway - about one-tenth - which cannot meet the booming demand in China," Cui He, president of the China Aquatic Products Processing and Marketing Alliance, told the Global Times on Wednesday.

The salmon market resumption has affected many countries. In a statement the Norwegian Seafood Council (NSC) sent to the Global Times, it said that Norway had exported 21,867 tons of seafood to China worth 584 million kronor ($68.7 million) as of mid-March.

"We see increasing demand for Norwegian seafood in the Chinese market, especially for fresh salmon and live shellfish," said Victoria Braathen, director for the Chinese mainland and Hong Kong at the NSC.

Imports of salmon from Chile have also returned to normal, a seafood firm based in Beijing told the Global Times on Wednesday, and both demand and prices are surging.

But for Australia to get trade relations with China back on track, experts said that the country must reflect objectively and rationally on its diplomatic position with China, its major trading partner.

"In the long run, globalization has made countries more interdependent, with political and economic relations interwoven," Song Wei, an associate research fellow at the Chinese Academy of International Trade and Economic Cooperation, told the Global Times on Wednesday.