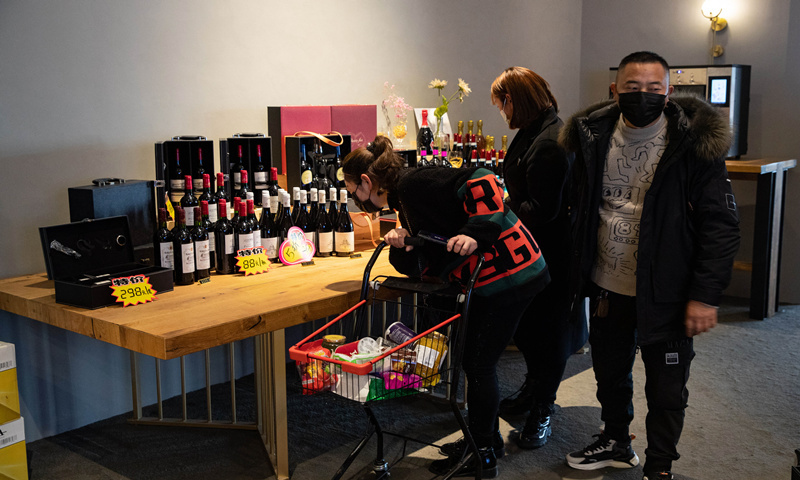 Australia's appeal to the WTO over China's anti-dumping sanctions on Australian wine drew a strong backlash on Sunday from Chinese business representatives and experts, who said that Australia's groundless complaints will only exacerbate tensions between the two countries.

Meanwhile, Chinese wine traders are accelerating their search for new alternatives to Australian wine to fend off future risks of uncertainty in trade tensions, as Canberra continues on a hostile path toward Beijing.

The Australian government filed a complaint on Saturday to the WTO over China's decision to impose import tariffs of up to 220 percent on Australian wine, according to media reports.

It was the second time in six months that Australia field complaints against China with the international trade organization, after Australia's first appeal on China's imposition of tariffs on its barley imports last year.

Australian Trade Minister Dan Tehan claimed that Australia would vigorously defend the interests of the wine industry, which is accused of anti-competitive behavior by China, Australian Broadcasting Corp reported on Saturday.

While the Australian government has the right to file the case at the WTO, Australian wine dumping in China is evident and there is very little chance for it to win such a groundless appeal, Chinese wine industry insiders told the Global Times on Sunday.

China's anti-dumping actions were based on solid facts and the Australian government will not win the case, Huo Xingsan, secretary general of the Wine Branch of the China Alcoholic Drinks Association (CADA), the organization that originally brought up the Australian wine dumping case on behalf of the interests of the Chinese wine industry, told the Global Times on Sunday.

"The dumping of Australian wine has jeopardized the fair play of the domestic wine industry, and it hurts the wide interests of domestic winemakers and grape growers," said Huo.

In response to the application from the domestic wine industry, the Ministry of Commerce (MOFCOM) issued announcements in August 2020, saying that it had decided to launch anti-dumping and countervailing investigations against imports of relevant wines from Australia.

The MOFCOM said it has conducted the investigation in strict accordance with relevant Chinese laws and regulations as well as WTO rules.

The final decision was made on March 26 after the result of the investigation suggested that there are dumping and subsidies on imported wine from Australia, which caused substantial damage to China's domestic wine industry.

The MOFCOM imposed anti-dumping duty ranging from 116.2 percent to 218.4 percent, starting on March 28.

The imposed tariffs, together with other market factors, have taken effect, with data from Wine Australia showing that Australian winemakers shipped just A$12 million ($9 million) worth wines to China in the four months from December 2020 to March 2021, compared with A$325 million a year earlier.

Currently, French, Chilean, Spanish and Italian wines are among the top sources of imported wine in China, while Australian wines have fallen far below the top 10, according to the CADA.

Before the recent sharp drop, Australia was the top source of wine imports to China, with a market share of 37 percent, well ahead of France at 27 percent, Chile at 13 percent and Italy at 6 percent, data from industry body Wine Australia showed in June last year, media reports said.

Despite his decision to take China to the WTO over wine tariffs, Tehan reportedly said on Saturday that Australia "would love to be able to sit down (with China's government) and be able to resolve these disputes."

However, Chinese wine industry insiders said that the Australian government's latest move, along with many other tough and groundless attempts against China, was "sprinkling salt on the wound" of already soured bilateral relations and adding to the risks of uncertainty for the already fragile trade relationship - which is prompting them to find alternative sources.

Le-Lis, a Guangzhou-based wine trading company, is diversifying its sources of wine amid the tariffs imposed on Australian wine and the rising trade friction.

A manager with Le-Lis surnamed Lin told the Global Times on Sunday that it used to import dozens of containers of Australian wine annually but now it hardly imports any now.

"Businesses can still import Australian wine for sure, but there are no profits in selling it," said Lin.

The change has brought about a very limited impact on Lin's business operation since it is expanding imports of French wine. The company is also in talks with domestic winemakers for future supplies, which have seen rising popularity these days as they offer value for money.

"What Australian authorities have done to China is not right… and as a matter of fact, for traders like us, we can sell other wines without importing from Australia, because other supplies are just as good as Australia's," said Lin.

Australia's complaint over anti-dumping actions against its wine came three weeks after the WTO said that it would set up a panel of experts to resolve the barley trade dispute between Australia and China in late May following the Australian government's appeal.

In responding to the case, the MOFCOM said on June 3 that China would handle the anti-dumping and countervailing case of imported Australian barley in accordance with WTO dispute settlement procedures.

Australia fully understands that it would take the WTO two to four years to process the wine trade dispute before reach any resolution, and Australian's latest move harbors the ulterior motive to politicize and weaponize the trade dispute to slander China on an international platform, Chen Hong, a professor and director of the Australian Studies Center at the East China Normal University, told the Global Times on Sunday.

"Any sovereign government in the world has the responsibility to ensure sound development of their domestic markets and protect domestic industries against unfair practices such as dumping and subsidies by international competitors, and to vilify such rightful measures as coercion and bullying is simply a malicious attempt as part of a malign 'scare and smear' campaign against China," Chen said.

"To put on another farcical performance at the WTO will only thrust the freezing bilateral relations deeper into an abyss," he said.