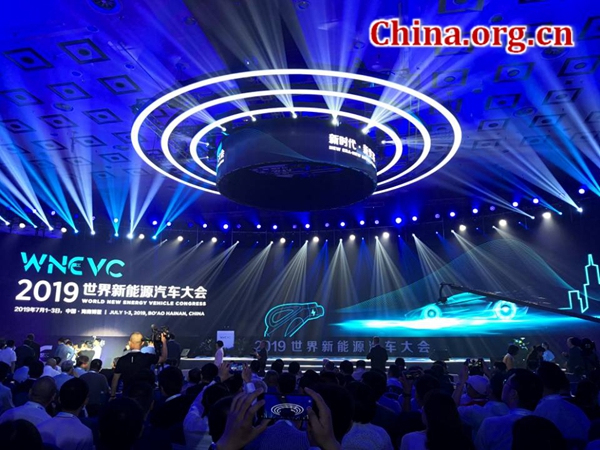 With a new round of technological revolution underway represented by new energy, new material, and artificial intelligence, the new energy vehicle (NEV) industry is entering a stage of accelerated development.

In this context, some of the global auto industry's heavyweights gathered at the World New Energy Vehicle Congress (WNEVC) in south China's Hainan province on July 1-3, shared their NEV strategies and addressed the various concerns emerging in the development of the industry.

Herbert Diess, chairman of the Board of Management of Volkswagen, believes that electric cars are the best and most efficient way of cutting CO2 in road traffic while noting that 14 percent of global greenhouse gas emissions come from transport.

With this understanding, Volkswagen aims to be CO2 neutral by 2050, Diess said.

He hailed China as a global forerunner in E-mobility and said that Volkswagen will stay committed to the Chinese market.

Klaus Frohlich, a member of the board of management of BMW AG for development, expected China to be the world's first country to have a smart city.

He said that BMW's goal to lead in sustainable mobility technology and innovation fits perfectly in line with China's vision for future mobility, especially its vision for NEV and intelligent connected vehicles.

BMW is willing to collaborate with Chinese partners in the areas of E-mobility and digitalization to offer safe and zero-emission intelligent transport and facilitate China's building of smart cities, Frohlich said.

BMW plans to introduce 25 electric models by 2023, two years ahead of schedule.

Wang Chuanfu, chairman and president of Chinese automaker BYD, said China has formed a complete NEV industry chain over the past decade with a solid technological foundation as well as experiences in promoting the mass use of NEVs.

BYD has been the world's top-selling NEV makers for four years running.

Zhu Huarong, president of another Chinese automaker Changan Auto, said that electrification is an irreversible trend and all stakeholders have to face up to the challenges relating to it, including challenges in safety, cost, production capacity, and charging facilities.

However, Zhu is still optimistic about NEV growth, saying NEV is the foundation and a top priority in Changan Auto's strategic transformation, and the automaker will continue to pursue its goal of electrifying all its vehicles by 2025.

Chen Zhixin, president of the leading Chinese automaker SAIC Motor, noted that China's NEV industry is experiencing a transition from policy to market being its major driving force.

He predicts that the NEV industry will surely experience pains as government purchase subsidies come to an end by 2020. He believes that it is only when market demand becomes the main driving force that China's NEV industry will have a foundation for sustainable development and compete globally.

Chen called for relevant authorities to provide a more predictable industry environment and long-term support for the use of NEVs.

Ratified by China's State Council and organized by the China Association for Science and Technology (CAST) and the People's Government of Hainan, WNEVC focused on the transformation of the auto industry and the ecological improvement of the environment. Themed "New Era, New Revolution, New Industry," the event was attended by 1,500 Chinese and foreign representatives from government, industry, and academic institutions.