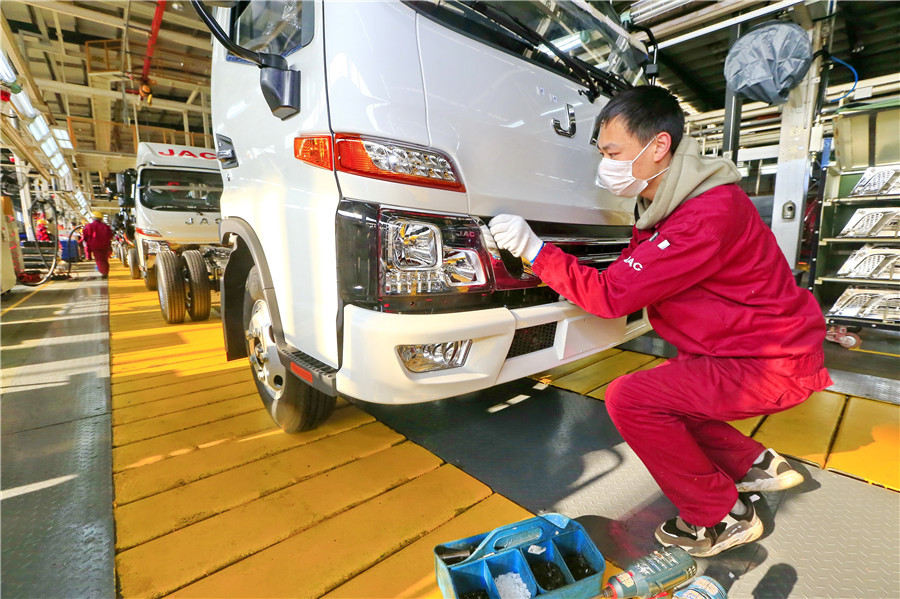 An employee works on the production line of a carmaker in Suining, Sichuan province. (Photo: China Daily)

China is streamlining the necessary examination and approval procedures for carmakers and auto part suppliers, including those for new product launches, as part of its efforts to help companies resume operations amid the novel coronavirus outbreak closures.

Automakers have been temporarily allowed to submit applications for launch of new models without third-party test reports as long as they can provide valid verification reports, the Ministry of Industry and Information Technology said on its website on Wednesday.

The ministry has allowed the companies to send applications for the parameter renewals of licensed models and provide the test results later, and has slashed the time needed for new vehicles to get all approvals.

Companies that have been ordered to rectify some problems have been given a grace period of three months, it said.

"The ministry will give priority to key industries like the auto sector for production resumption and will coordinate with other ministries to solve problems such as labor shortage and restrictions on logistics," said Xin Guobin, vice-minister of industry and information technology.

The novel coronavirus outbreak has disrupted car production and sales in the country, the world's largest vehicle market since 2009.

A total of 285,000 vehicles rolled off the assembly lines in February, down by nearly 80 percent on a yearly basis, according to statistics from the China Association of Automobile Manufacturers.

Vehicle sales in February slumped 79 percent on a yearly basis to 310,000 units. During the first two months of this year, vehicle sales totaled 2.24 million units in the country, down 42 percent year-on-year, according to the CAAM.

Xin said as the measures have been put in place, carmakers and auto parts suppliers in the country, including those hard-hit regions like Hubei province, are resuming operations in an orderly manner.

Dongfeng Motor Corp's truck factory in Shiyan, Hubei, is now able to produce 200 vehicles per day while its two passenger vehicle and complete vehicle firms in the provincial capital of Wuhan have also restarted operations.

SAIC-GM-Wuling, a carmaker based in South China's Guangxi Zhuang autonomous region, said without the government measures, the suppliers' failure to deliver products may have caused delays in the company's new vehicle development as well as production of its popular Baojun-branded models.

"We have seen our daily output return to above 5,000 units, the same as last year. Meanwhile, we exported 14,078 vehicles and knockdown kits in the first two months of the year, up 248 percent year-on-year," said the company.

According to CAAM data, more than 90 percent of the country's 23 carmakers, whose combined sales account for 96 percent of the total, had restarted operations by March 11. By the same date 11 out of the 13 major global auto suppliers, including Continental and Bosch, had resumed operations at their factories across the country.

US carmaker Ford has resumed operations at its plants in China and will ramp up production in the coming weeks according to demand, company officials said.

Germany's Volkswagen, the country's best-selling international carmaker, said all but two of its 20 manufacturing facilities that produce cars and auto parts in China have restarted production.