Road tests of more than 150,000 kilometers were made by 54 driverless vehicles from eight companies in Beijing in 2018, an industry report said. 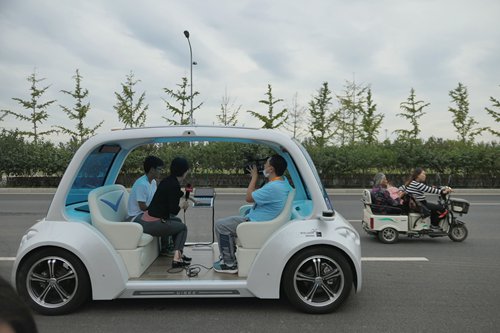 Analysts said the figures show progress in China's autonomous driving technology and pave the way for the industrialization of the sector.

According to the report, about 140,000 kilometers of the tests were made by autonomous cars belonging to domestic internet company Baidu Inc, according to a statement on the website of the Beijing Municipal Commission of Transport on Friday.

Seven other companies accounted for the rest: NIO, BAIC BJEV, Pony.ai, Daimler, Tencent, Suzhou Didi Travel & Tech Co and Audi. The report is the first of its kind in the country.

The tests showed that domestic industrial technology has achieved some progress, which laid the foundation for the industrialization of China's autonomous driving industry, Su Hui, an analyst with the China Automobile Dealers Association, told the Global Times on Sunday.

"Although China's autonomous driving market is far from mature, some external conditions, such as the gradual application of 5G technology and investment in research and development done by many auto companies, will help support the development of the sector," Su noted.

As the sector is hot in the Chinese market, rational behavior is required to guarantee the safety of driverless driving, he said.

Minister of Transport Li Xiaopeng said at a press conference on February 28 that autonomous driving is a cutting-edge technology in transportation, which plays a vital role in ensuring safety, improving efficiency, enhancing service and developing industries.

Li noted that the ministry attaches great importance to the development and application of autonomous driving technology, and it encourages exploration in the industry with a strong focus on safety.

The current domestic traffic regulations need upgrading in the future, such as building special transport facilities for autonomous driving vehicles, an industry analyst based in Beijing surnamed Peng said.

The Chinese government announced a pilot scheme for the regulation of intelligent road vehicle tests and management in April 2018. It was the first time that such rules were issued to regulate autonomous driving road tests at the national level.

In July 2018, the Ministry of Transport unveiled guidelines for the construction of closed field tests for autonomous driving.

The research and the development of driverless driving is on the rise, but applications still need to follow set rules, Peng said.

In a bid to address such issues, Beijing transport authorities will endeavor to improve the test and evaluation system for intelligent connected vehicles and gradually expand the scope of autonomous driving tests and testing roads, according to the statement. Also, many efforts will be made to advance test work for manned autonomous driving.