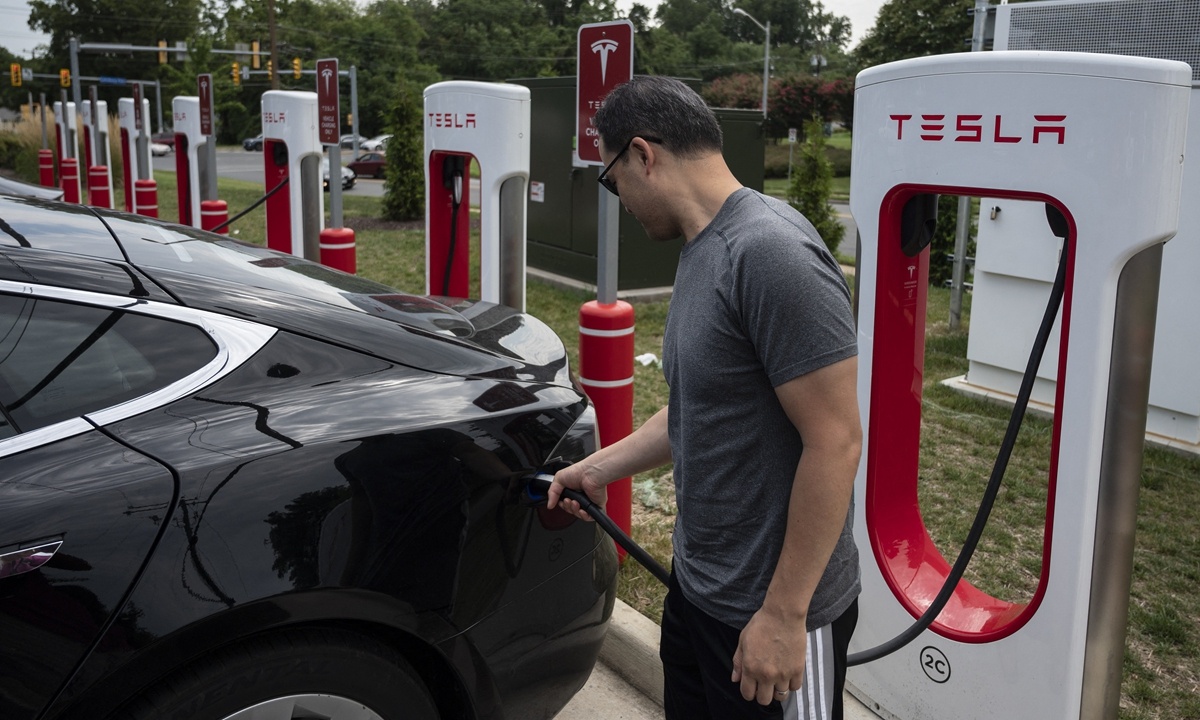 A man charges his car at a Tesla super charging station in Arlington, Virginia on August 13. (Photo: AFP)

Two US senators pressed the Federal Trade Commission to probe Tesla, saying the company has misled consumers and endangered the public by marketing its driving automation systems as fully self-driving.

"Tesla and (CEO) Mr. (Elon) Musk's repeated overstatements of their vehicle's capabilities...put Tesla drivers - and all of the traveling public - at risk of serious injury or death," Senate Democrats Richard Blumenthal and Edward Markey said in a letter to newly appointed FTC Chair Lina Khan.

"Tesla drivers listen to these claims and believe their vehicles are equipped to drive themselves - with potentially deadly consequences."

The letter, which came after the National Highway Transportation Safety Administration (NHTSA) opened a probe into Tesla's Autopilot on Monday, added to pressure on Tesla.

Tesla did not immediately respond to a request for comment.

Autopilot is a standard feature for Tesla cars and enables the vehicles to maintain distance from cars in front. Tesla sells its advanced driver assistant features such as lane changing and automated parking under the name Full Self-Driving (FSD) for $1,000, although the system does not make its vehicles fully autonomous.

Musk, who has nearly 60 million Twitter followers, uses the term FSD frequently, generally referring to the Tesla package of features, but many consumers take it to mean fully autonomous driving. Musk has touted how safe the technology is and promised that its vehicles would soon drive themselves, only to miss his own deadlines.

NHTSA said in June that since 2016 it has opened 30 investigations into Tesla crashes in which the agency suspects advanced driver assistance systems were in use.

The NHTSA in 2018 said in a letter to Tesla the company had made "misleading statements" about the safety of its Model 3 and had confused consumers. The agency referred the issue to the FTC to investigate whether Tesla's statements constituted "unfair or deceptive acts or practices."

The NHTSA said it had identified 11 crashes since January 2018 in which Teslas "have encountered first responder scenes and subsequently struck one or more vehicles involved with those scenes."

After the new probe, the auto safety agency could opt to take no action, or it could demand a recall, which might effectively impose limits on how, when and where Autopilot operates.

Any restrictions could narrow the competitive gap between Tesla's system and similar advanced driver assistance systems offered by established automakers.