Baidu, BYD to partner on mass production of self-driving cars 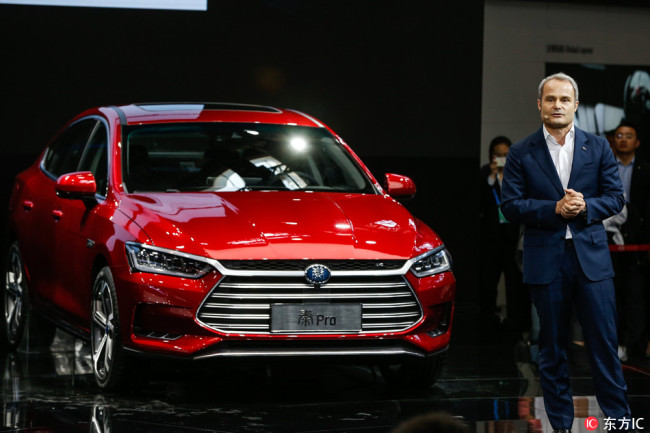 Wolfgang Egger, design director of Chinese automaker BYD, delivers a speech as he presents the Qin Pro self-driving car during the Auto China motor show in Beijing on April 25, 2018. [Photo:IC]

Last year Baidu launched Project Apollo, named after the Apollo moon landing project, to mark the start of its push to get self-driving cars on the road in China. A technician from Baidu said that Project Apollo will deliver the software platform that can be used by car manufacturers.

At Baidu's AI Worldwide Developers Conference in April, BYD became tech giant's 100th partner in the company's ecological cooperation initiative. And on Wednesday, BYD invited Baidu to attend its Worldwide Developers Conference where it unveiled its self-driving car called Qing Pro, which is the only car that passed Apollo's certification process.

The Apollo platform will improve efficiency in the auto industry, Baidu's CEO Zhang Yaqing said on Wednesday. He said that it can prevent nine out of 10 traffic accidents, cut 40 percent off travel times, and reduce fuel consumption by 40 percent. According to Zhang, half of the work invested into developing the Apollo platform was focused on its security. He said that the partnership between Baidu and BYD will guarantee the safety of drivers.