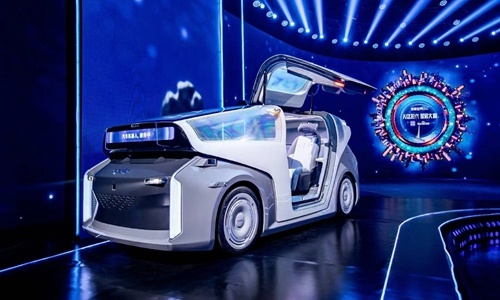 "We believe that cars of the future will be robocars. They will drive autonomously, act as both an intelligent assistant and a loyal companion," Baidu CEO Robin Li Yanhong said, as he unveiled a robocar with L5 autonomous driving capabilities at its flagship technology conference, Baidu World 2021.

Li said that the robocar will drive automatically, understand words, take orders and continuously learn from the driver to offer a more personalized experience.

Li also spoke about the shift to the autonomous driving 2.0 era, which is marked by a transition from the technical verification stage to large-scale commercial operations. Li sees the company's Luobo Kuaipao, the new robotaxi mobile platform, as critical in this stage.

Li's comments came as consumers both in China and overseas are growing concerned about the safety of autonomous driving technologies after recent related accidents.

Chinese electric vehicle start-up Nio said on Monday that it did not delete or modify any data as claimed after a recent fatal road accident involving its ES8 sport utility vehicle.

The US government launched an investigation into crashes involving Tesla's Autopilot driverless technology, after 11 accidents have been reported since 2018, resulting in 17 injuries and one death.

"Education or training is necessary for buyers prior to car delivery, so they know that they should be ready to take over the car at any time," Feng Shiming, an auto analyst with Shanghai-based Menutor Consulting, told the Global Times, adding that facial recognition should also be used to help ensure the driver is focused on the road.

However, despite the safety concerns, companies are pushing ahead their efforts in autonomous driving technology.

At of the end of the second quarter this year, the Baidu Apollo autonomous driving service had provided more than 400,000 rides and driven more than 8.7 million miles.