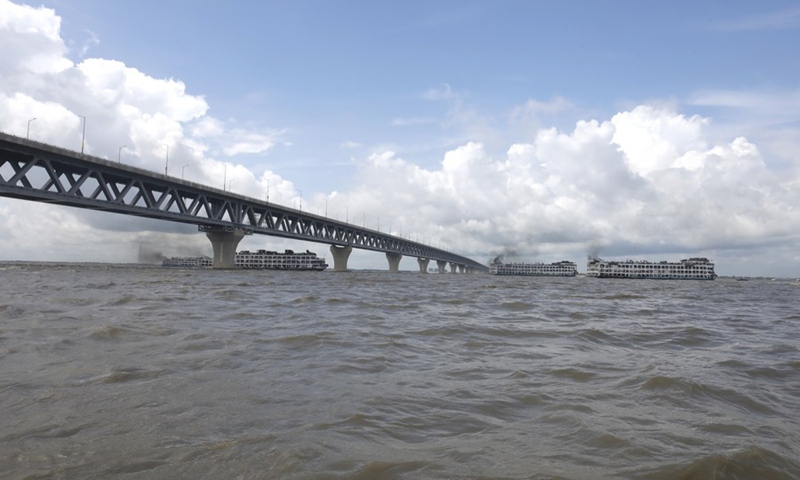 The Bangladeshi finance minister's clarification of a false report published by the Financial Times demonstrates that the so-called "China debt trap" is a fabrication to disrupt and undermine mutually beneficial cooperation between China and other developing countries, said Wang Wenbin, Chinese Foreign Ministry spokesperson, on Monday.

The comment came after Bangladeshi Finance Minister Mustafa Kamal made a clarification of a distorted report by the Financial Times, which smeared China's Belt and Road Initiative (BRI) loans to developing countries.

Minister Mustafa Kamal in the interview made clear that any project in any country could be financed if it was proven financially viable through rigorous study. He was in no way warning about Chinese loans, the Ministry of Finance of Bangladesh said in a clarification in response to the Financial Times report, following the false report on August 9.

Wang said that over the years, China has provided a large number of concessional loans with low interest rates and long maturities in response to the needs of developing countries to help them improve their infrastructure and people's well-being.

Among the foreign debts of these countries, the proportion owed to China is much lower than that to international capital markets and multilateral financial institutions of Western countries, Wang said.

For example, Bangladesh owes approximately $4 billion to China — a trifling amount compared with Bangladesh's GDP of $416 billion, and its external debt of $51 billion, the Ministry of Finance of Bangladesh said in the clarification.

Facts have repeatedly proved that the so-called "China debt trap" is in fact a "rhetoric trap" fabricated by people with ill motives to disrupt and undermine mutually beneficial cooperation between China and other developing countries, Wang said.

In the face of facts, any absurd remarks smearing the BRI and China's cooperation with other developing countries will collapse, Wang said.

The BRI has received extensive support and active participation from developing countries, and cooperation has yielded fruitful results

Chinese State Councilor and Foreign Minister Wang Yi said on August 7 that China stands ready to promote the greater synergy between the BRI and Bangladesh's development strategies, accelerate joint feasibility studies of the China-Bangladesh free trade agreement, share development and market opportunities with each other, and share advanced experience and technology.