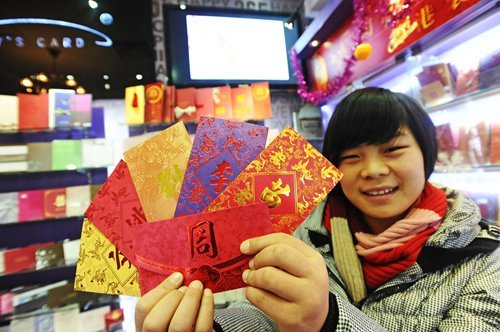 A Chinese bank is convincing customers to keep alive the age-old Spring Festival tradition of gifting those around with real money by drawing fresh, new bank notes from their outlets, amid a decline in the need of physical bank notes when communal actinides are reduced to the minimal during the "stay put" policy to ward off a winter pike of the coronavirus in China.

The move comes as the use of physical cash is already greatly reduced in China with the popularization of digital payment.

In one promotional piece posted on the app of the China Guangfa Bank (Beijing Branch), a commercial bank headquartered in South China's Guangzhou, the bank reminded its customers that despite the popularity of digital payments, "real red envelopes traditionally are filled with real bank notes" and only such is true to the tradition of envelop giving.

Stating that brand-new cash works better than more cash, the bank said it had prepared a new supply of brand-new bank notes waiting for customers to withdraw.

"If you don't have cash or don't have enough new bank notes, you really need to visit our branches!" the bank said.

China's central bank on Monday conducted 110 billion yuan ($17.03 billion) of reverse repos to keep liquidity stable in the banking system ahead of the Spring Festival holiday.

Explaining its decision, the People's Bank of China said residents' trend of withdrawing cash from banks has notably declined during this year's Spring Festival holidays and there is relative increase in pre-holiday fiscal spending.

Based on calculation by Reuters, the net liquidity injection into the market on Monday is 10 billion yuan.

The interest rate for the 7-day reverse repos was set at 2.2 percent, according to a statement on the website of the People's Bank of China.