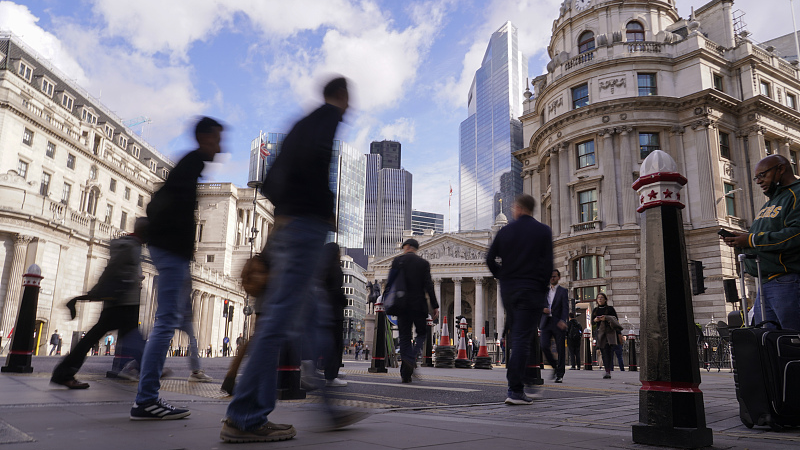 People walking outside the Bank of England, in the financial district known as The City, in London, UK, October 7, 2022. (Photo: CFP)

The Bank of England on Thursday hiked its interest rate by half a point to 3.5 percent, the highest level in 14 years, in a bid to cool sky-high inflation.

The increase was the BoE's ninth in a row, while the amount matches a hike Wednesday by the Federal Reserve. The European Central Bank announces its latest rate decision at 1315 GMT.

"The labour market remains tight and there has been evidence of inflationary pressures in domestic prices and wages that could indicate greater persistence and thus justifies a further forceful monetary policy response," the BoE said in a statement following its latest rate increase.

The hike was less than in November when it increased borrowing costs by 0.75 percentage points.

The Fed also slowed the pace of its tightening on Wednesday, as inflation eases on both sides of the Atlantic.

The BoE on Thursday added that it expects the UK economy to contract 0.1 percent in the fourth quarter, better than its previous forecast for a contraction of 0.3 percent.

The BoE and UK government both believe the British economy has entered a recession that is expected to last all next year on fallout from rocketing energy and fuel bills.

UK inflation stands at 10.7 percent, the highest level for around 40 years.

Surging prices are eroding the value of wages, causing public and private sector workers to go on strike in an attempt to secure higher salaries.