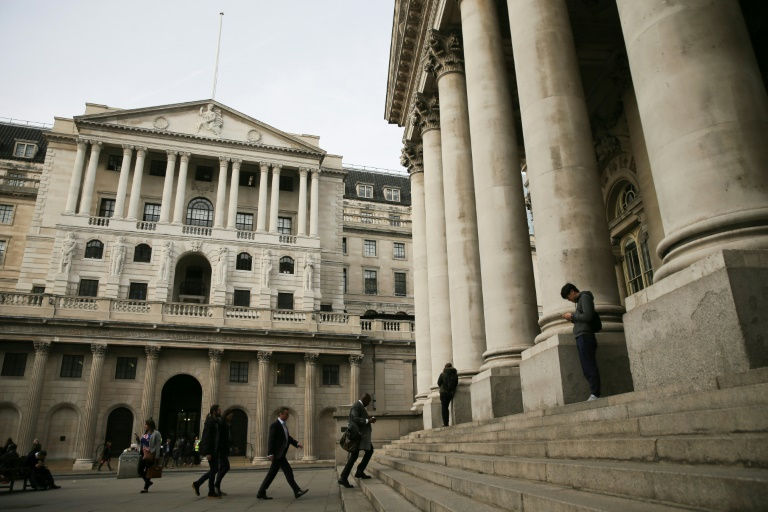 The Bank of England froze Thursday its key interest rate at 0.5 percent but cautioned that it could rise more quickly than expected to help bring down inflation.

The BoE also ramped up its outlook for the British economy, despite persistent uncertainty surrounding Brexit.

The central bank's nine-strong monetary policy committee "voted unanimously to maintain bank rate at 0.5 percent", it said in a statement, but warned that borrowing costs could rise sooner than expected "in order to return inflation suitably to target".

"Monetary Policy would need to be tightened somewhat earlier and by a somewhat greater degree over the forecast period than anticipated," it added.

In reaction, the pound surged against the euro and dollar on the prospect of a potential rate hike as soon as May, according to analysts, and further rises thereafter.

Global stock markets have meanwhile tanked this week on fears that the US Federal Reserve would also ramp up interest rates more quickly than expected following bright jobs data.

"The Federal Reserve is leading the way followed by the Bank of England and European Central Bank. The Bank of Japan is the odd man out but that may change later this year.

"Investors are recognising that the liquidity support for global equity markets is starting to be removed -- but talk of a bear market is premature."

The BoE added Thursday in its latest quarterly forecasts that British gross domestic product (GDP) was expected to grow by 1.8 percent this year. That was up from the 1.6 percent given in November.

The economy was then expected to expand by 1.8 percent again in 2019, when Britain is due to depart from the European Union. That was upgraded from previous guidance of 1.7 percent.

"The global economy is growing at its fastest pace in seven years," the BoE noted.

"UK net trade is benefiting from robust global demand and the past depreciation of sterling."

The BoE forecast Britain's annual inflation rate to hit 2.4 percent this year before slowing to 2.2 percent next year.

The bank's chief task is to keep inflation close to a target of 2.0 percent, while the current annual rate stands at 3.1 percent.

"There will be ups and downs in financial markets, and the Brexit process will twist and turn before it is concluded," Carney told reporters, stressing any rate rises would be gradual and limited.

"Whatever happens, the committee will monitor developments closely and respond appropriately to ensure that inflation returns sustainably to the 2.0-percent target."

The pound had tumbled after Britain's shock Brexit referendum in June 2016, but this has served to make British exports cheaper for foreign customers using stronger currencies. In turn, that stimulated economic activity.

In recent times however, sterling has built up some strong gains against the dollar.

Also on Thursday, the central bank maintained the level of its quantitative easing (QE), or stimulus cash, pumping around the economy at £445 billion ($620 billion, 502 billion euros).

Price rises accelerated across the UK during 2017 after Britain's referendum vote in favour of leaving the EU pushed down on the pound, hiking the cost of imported goods.

Consequently, the BoE raised its main interest rate in November for the first time in a decade -- to 0.5 percent from a record-low 0.25 percent.