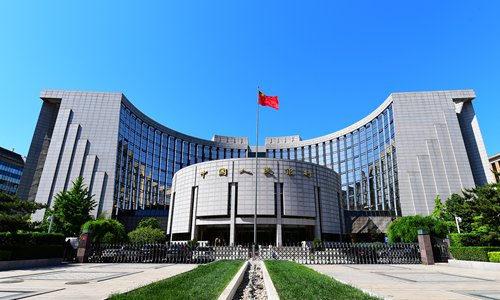 A view of People's Bank of China in Beijing. (File photo: VCG)

"The world has already made an objective judgment on the Chinese economy and its contribution to the world economy, which will not be affected by some wanton words from a random person," said Hua Chunying, spokesperson for the Chinese Foreign Ministry. "In fact, tarnishing others will not help solve one's own problems at home or resolve differences through consultation."

Banker confidence in the economy dropped 5.3 percentage points from Q2 to 33.9 percent during Q3, according to the People's Bank of China (PBC).

Entrepreneur sentiment for Q3 soured on the economy, index measures indicated confidence fell 2.1 percent from Q2 to 32.4 percent, according to a separate PBC survey.

However, over 60 percent of bankers and entrepreneurs surveyed viewed the Chinese economy was "normal" while roughly 30 percent said the economy was "more inclined to be cold," according to the PBC.

In clear contrast to the souring sentiment among bankers and entrepreneurs, Chinese urban households were generally upbeat about their income prospects during Q3.

Almost 19 percent of households said their income increased Q3, up 2.1 percentage points from the previous quarter, another PBC survey found. The income confidence index rose 0.8 percentage points to 53.4 percent in the same quarter.

The three surveys painted a clear picture of the status of the world's second-largest economy, which faces both downward pressures due to external trade and internal economic transitions, along with a resilient  Chinese economy.

China's Q3 economic growth dropped to 6 percent year-on-year, the slowest in decades. However, the rate was in the target growth range of 6 to 6.5 percent set by policymakers earlier this year.

Chinese officials have used a confident tone regarding the country's economic outlook while fending off what they describe as foreign officials' bad-mouthing of the Chinese economy.

Asked about a US official's claim that China's growth was "possibly below zero," Hua said that the 6.2 percent growth so far this year has ranked "among top of world's major economies" and "a hard-won result" under the growing difficulties, risks, and challenges China has faced.