BUSINESS Behind the growth 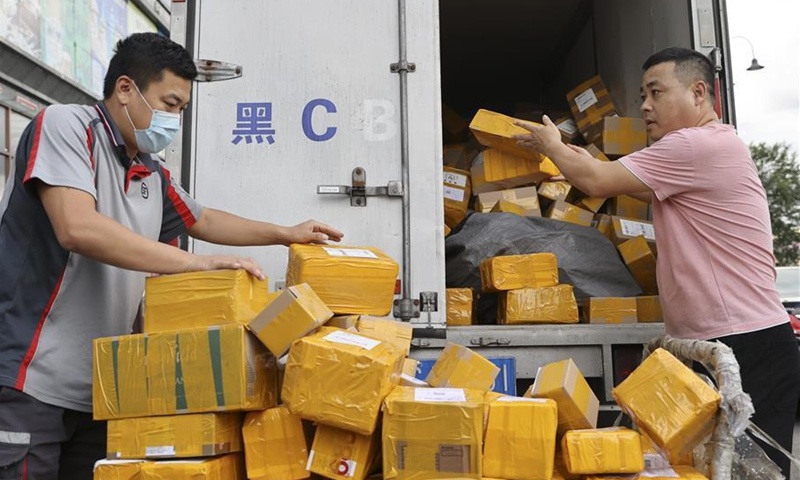 Driven by booming consumption in the post-pandemic era, China's domestic express delivery industry stands out for its ongoing success and increasing revenues. However, insiders have told the industry it needs to change after delivery sites in several cities failed to deliver packages on time, allegedly due to payment disputes between delivery workers and their employers.

News of a recent strike by disgruntled delivery workers that led to undelivered items piling up in warehouses went viral, causing many to ask whether the industry is quite as impressive as it seems.

Netizens linked the incident with the alleged workers' strike as increasing numbers of consumers came forward to declare that they had not been able to receive goods for weeks.

Meanwhile, as pictures and videos of abandoned stockpiles in local warehouses were re-posted online, speculation about a strike only grew. Large express delivery companies such as Yunda Express and ZTO Express have all been involved.

When asked about the allegations, a number of courier companies have denied any knowledge of a strike. ZTO Express said the rumors were unfounded, and that the company's network was stable. ZTO was actively preparing for the Double Eleven shopping festival in November, according to media reports.

Yunda Express also announced that all areas covered by its delivery network have been dispatched normally.

However, a business manager at a Yunda Express local delivery hub in central China's Hunan Province - where some workers have reportedly gone on strike - told the Global Times on Monday that certain delivery sites appeared "abnormal" since October and were no longer accepting new packages. She refused to go into detail about the reason for the disruption.

"It is hard to know when [the business] can get back to normal," she said, noting that if consumers are in a rush, it would be better to opt for other delivery service providers instead.

He Dengcai, deputy director of the China Federation of Logistics and Purchasing, told the Global Times on Monday that the rise in the express delivery volume reflected a revival of consumption in China, but added that there were still many "blockage points" in the circulation of express packages, especially as the service has become more ubiquitous.

Several business insiders reached by the Global Times commented that the express industry had not been on a healthy trajectory for a while now because some of the larger express delivery companies have been competing against each other by squeezing their franchisees and delivery staff on service costs, leaving them with unsustainably slim profit margins.

Xu Yong, chief advisor of cecss.com, a logistics market research platform, told the Global Times on Monday that the express delivery market is oversupplied, inevitably leading to market failure as a result of excessive competition.

"Delivery people are earning less than they have been promised - an aberration for an industry where living, labor and fuels costs are rising, but the delivery fees aren't," added Xu.

Zhao Ping, vice president of the Institute of the China Council for the Promotion of International Trade, has pointed out previously that when the revenue of express delivery service drops by more than 20 percent, the wages of couriers will drop by more than 10 percent.

A delivery person with ZTO Express in Beijing, who declined to be named, told the Global Times that his income had been slashed from around 1.4 yuan for each delivery, to 1.2, which when added up across the month, could mean thousands of yuan less.

"The service fees we get from the company are getting lower and lower due to the competition between the companies, which has led to an obvious reduction in our income even though the company's profits continue to grow," he added.

Another industry insider said that in September, the delivery fee was reduced to 0.5 yuan per item, and after deducting fuel and other necessary working costs, he could only earn around 0.25 yuan per piece.

Shao Zhonglin, former assistant secretary-general of the China Express Association, told the Global Times that the problems of the express delivery industry model are not new, and will only continue to grow.

"The unhealthy competition in China's express delivery industry has caused the average delivery fee to fall by more than half in the last decade - driving up demand. As demand increases, a delivery person that used to deliver 150 packages a day, now has to deliver up to 180, but the wages barely rose," said Shao.

Shao notes that companies should also be recruiting more staff or purchasing additional vehicles in order to reduce the pressure on staff, but that this aspect of the business remains underdeveloped, leading to the rising pressures and difficulties among employees.

The recent rumors of local delivery people going on strike weren't the only ones this year. In June, eleven local dispatch companies working under Yunda Express in Central China's Hunan Province announced they were shutting their businesses down in a bid to prevent losses after Yunda Express lowered their delivery fees without asking for their approval, according to The Paper in July.

The unhealthy development of the express delivery industry has already drawn the attention of the relevant authorities, which have urged enterprises to attach greater importance to the survival and stability of delivery workers.

Liu Jun, deputy director of the State Post Bureau, said at an industry forum ahead of the National Day in October that the downstream of the express delivery service is the foundation of the development of the industry, the success of which is directly linked to the immediate interests and protection of front-line couriers.

Liu called for pressure on the downstream of the industry to be reduced to ensure the interests of grassroots outlets and employees. He said to do so would require improved management and a more stable foundation if the industry was to grow in a healthy manner.