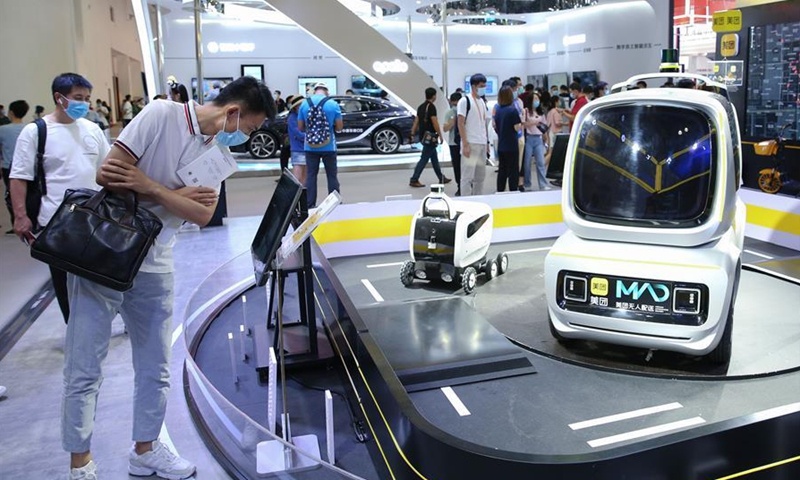 People look at an unmanned delivery vehicle at the booth of Meituan at the comprehensive exhibition area of the 2020 China International Fair for Trade in Services (CIFTIS) in Beijing, capital of China, Sept. 8, 2020. Chinese enterprises demonstrated latest innovations and technologies such as 5G and AI at the fair. (Photo: Xinhua)

Beijing has become the second Chinese city to be fully covered by ultrafast 5G signals, as the country moves full steam ahead on 5G mobile networks rollout, barely slowed down by US government's harassments or the coronavirus pandemic.

According to a statement released by the Ministry of Industry and Information Technology on Wednesday, Beijing has set up over 44,000 5G base stations, and the number is expected to reach 50,000 by the end of 2020. All these base stations have been connected to 5G independent networking, which means that the whole city is covered by 5G signals.

This is an example of how Chinese cities are rapidly pursuing construction of 5G infrastructure in response to the call of the central government.

Before Beijing, Shenzhen achieved full coverage of 5G independent networking with 46,000 base stations, making it the city with the highest density of 5G base stations in the world, the mayor of Shenzhen said at a press conference on August 17.

According to independent telecom industry analyst Xiang Ligang, China is not the first country to announce the commercial use of 5G, but it certainly is the world's leader in the actual progress of the industry, whether it comes to 5G infrastructure construction, 5G phones penetration or development of related peripheral products.

"The 5G industry has advanced in China with a speed that broadly exceeds market expectations. I expect China to be able to establish about 800,000 5G base stations by the end of this year," Xiang said.

As of the end of June, China's major three telecom operators, China Mobile, China Unicom and China Telecom, had reportedly rolled out more than 400,000 5G base stations.

Unlike some foreign markets where phone companies tested the 5G waters by twos and threes, Chinese mobile phone makers are in a rush to launch 5G phones in a whole range of product lines from high-end sets to phones costing only about 1,000 yuan ($146). Total 5G subscribers also exceeded 60 million in China.

Zhang Yi, CEO of iiMedia Research and a 5G mobile phone user, said that compared with 4G phones, he felt that internet speeds were much faster hooked with the ultrafast 5G network. For example, he can download a movie in just a few seconds using a 5G phone. However, apart from that, the 5G phone is not that special.

"Broader applications for the 5G era, just like what short video apps stand for in the 4G era and what WeChat stood for in the time of 3G, have not emerged yet," Zhang told the Global Times on Wednesday.

However, experts stressed that 5G is not all about personal consumption and entertainment. Instead, the potential is great for 5G to benefit China's real economy by accelerating digitalized industrialization and propelling manufacturing and services productivity - the exact reason why the US government is jealous of Huawei and has launched a mean-spirited attempt to skewer the Chinese high- tech company.

For example, 5G's low latency will make it possible for the operating systems of future cars to respond quickly and sensitively to any driving conditions. This would fuel the development of autonomous driving, which is not feasible in the 4G environment, Zhang said.

Bu Rixin, a consulting partner of Chuangdao Investment, said that the connectivity of industrial machines could be enhanced with help of 5G technology, which would result in better production efficiency or even the realization of Industry 4.0.