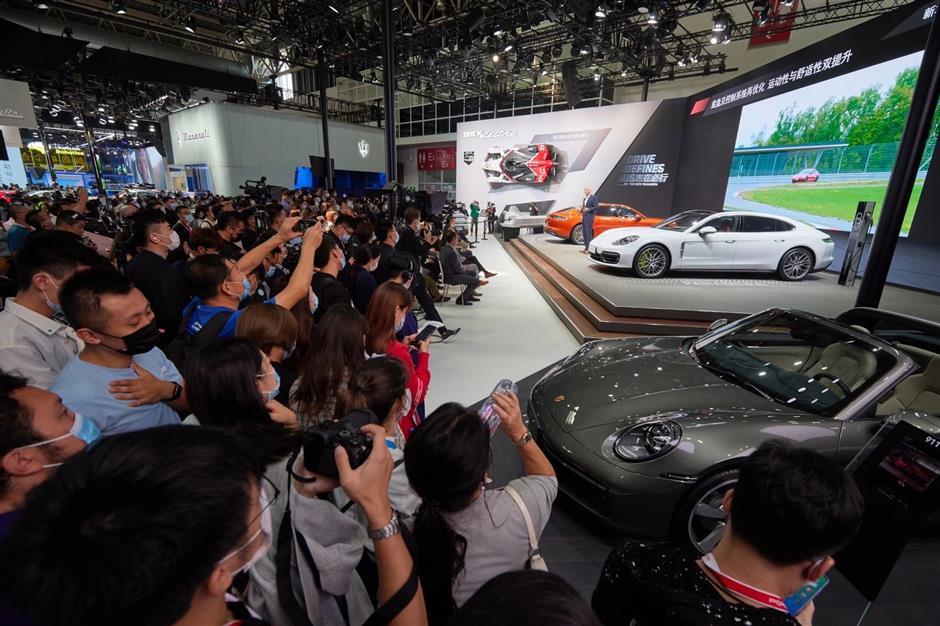 Major automakers are showcasing their latest models and technologies at the Beijing auto show.

New-energy vehicles have taken the spotlight at the 16th Beijing International Automotive Exhibition as automakers aim to tap growing consumer demand in China.

Automakers are optimistic about the future development of the country’s new-energy vehicle sector as the government aims to have these vehicles account for more than 20 percent of the nation's annual car sales by 2025.

The Beijing auto show, with a total exhibition area of 200,000 square meters, is also the country’s largest auto show this year under the COVID-19 pandemic.

It is of great significance to boost China's auto consumption, promote development and enhance confidence in the global automotive industry.

The organizer of the Beijing auto show said that the exhibition aims to facilitate the steady recovery of China’s automotive industry and market, accelerate the strategy of domestic economic circulation as well as economic stability abroad.

The organizing committee stated: “The Beijing auto show is not only a platform to showcase  innovative technologies and to promote international trade and communication, but also will witness the important moment of cooperating and coordinating with each other, tiding over the crisis and reviving the automotive industry.”

In 2020, multinational auto companies have increased their investment in the field of new-energy vehicles, including seeking more cooperation on batteries with suppliers and more efforts on research and development.

Werner Eichhorn, president of Audi China, said that the automaker will further promote its electrification strategy with a strong product line-up.

"Audi will have more than 30 electrified cars in the years to come, which will be a step-by-step process toward zero emissions in the Chinese market," said Eichhorn. "Audi already localized the e-tron productio in Changchun with its partner FAW-Volkswagen."

Julian Blissett, president of GM China, said during an interview with Shanghai Daily on the first day of Beijing auto show that General Motors is committed to further deepening its footprint in the field of new-energy vehicles. The US automaker aims to have 20 new-energy vehicle models available to Chinese consumers by 2023.

"In electrification, more than 40 percent of GM’s new launches in China in the next five years will be electrified models," Blissett said. "They will all be manufactured in China, with almost all parts coming from local suppliers."

General Motors will invest in local production of both electric vehicles to be sold and the parts in China, including battery and drive units.

Japanese carmaker Nissan brings its new-generation electric sport-utility vehicle named Ariya to the exhibition, as the automaker showcases its latest innovations, products and technologies aimed at meeting the consumer demands of the world's largest automotive market. It plans to introduce nine electical vehicles in China by 2025, including electrics and e-POWER vehicles.

In addition to new-energy vehicles, smart and connected cars and luxury vehicles are among the highlights of this year’s exhibition. Themed as "smart vehicle for the future," the exhibition also showcases the Internet of vehicles, autonomous driving technology and lightweight technology.

In the first eight months, the country's overall car sales were down 9.7 percent to 14.55 million units,  attributed to macro-economic headwinds amid the COVID-19 pandemic, according to the country’s top industry association the China Association of Automobile Manufacturers.

The association expects car sales to improve in the second half of this year, led by increasing consumer demand and the launch of new models on display at the Beijing auto show.

According to an auto industry report published by WAYS Consulting Co, about 64 new models will make their debut during the Beijing auto show this year, and among this  29 new-energy vehicle models will be displayed.

New-energy vehicle start-ups have also passed through the promotion window and gradually entered the initial stable stage of mass production and delivery to car buyers. Tesla and NIO bring their latest electric vehicles, with smart and connected technologies applied to their cars.

With the upgrading of the automotive industry, traditional automakers are choosing to establish new brands for their new-energy vehicles. Dongfeng Motors brings vehicles under its new-energy brand named Voyah, BAIC launches its new brand Arcfox, while Geely will reveal its electric vehicle brand Geometry at the Beijing auto show.

In addition, the Beijing auto show will continue to set up automotive parts and  related products halls. Auto parts makers will  bring their latest products and technologies.