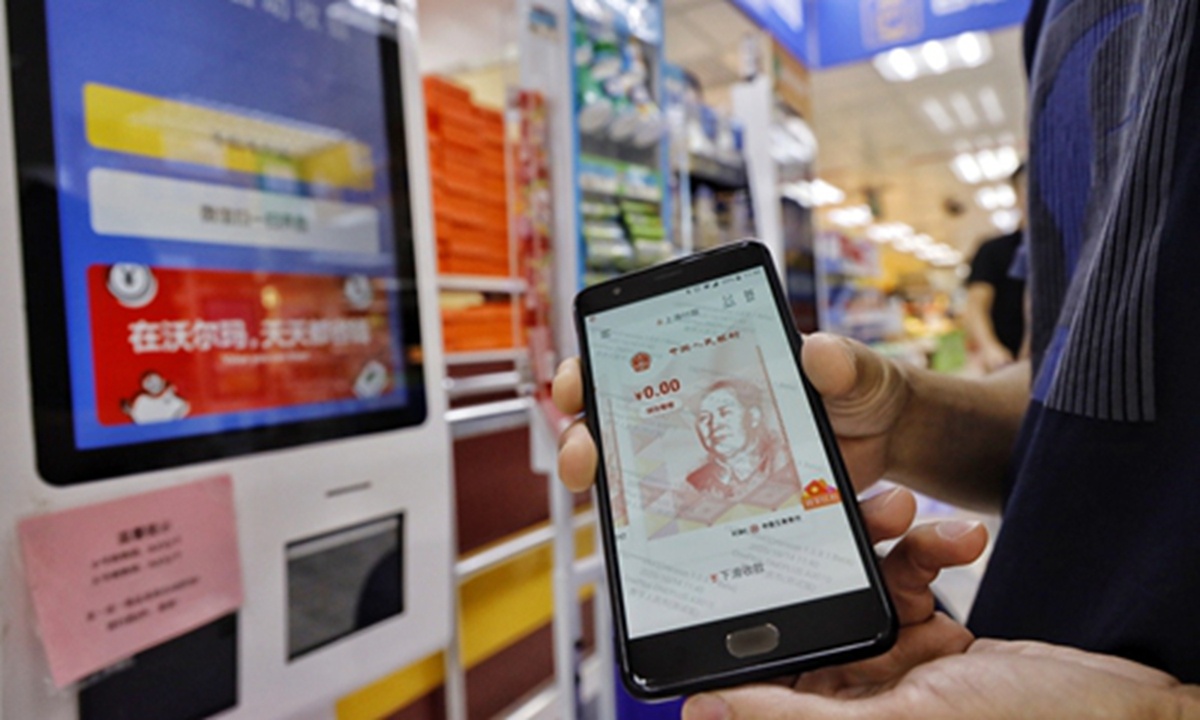 Residents who received "red packets" of digital yuan use the money in stores in Shenzhen, Guangdong Province. (Photo: Global Times)

Beijing's financial authority has announced that 40 million yuan ($6.27 million) in digital yuan will be given away to local residents in a "regular test," in the latest trial that analysts say could reflect political considerations by China's policymakers to promote the virtual currency, given the trial's large scale and location in the Chinese capital.

According to the Beijing Local Financial Supervision and Administration, 40 million yuan worth of digital RMB will be separated into 200,000 red packets with 200 yuan each, and will be given away by raffle as the capital city moves to conduct a trial of the country's sovereign digital currency. Registration for the raffle will begin on Friday and the trial will be held during the period of June 11-20.

This is the second time that Beijing runs digital yuan pilot program after the city conducted the first trial in the Wangfujing shopping area in February. But the total amount of new round of digital yuan trial reached 40 million yuan and was four times than the first trial, and more stores, nearly 2,000, in the capital will join the trial.

"The previous trial was an elementary test. The new round is more mature, in that it will be a full-scale and deeper trial with a larger usage range and amount," Chen Bo, director of the Digital Finance Research Center at the Central University of Finance and Economics, told the Global Times on Wednesday. "The 'last stop' of the digital yuan trial is usually held in the capital."

"Trials of digital yuan were usually conducted in other cities before coming to the capital. This large-scale trial in Beijing" may add political weight on the digital yuan, said Chen.

As a next step, Beijing will ramp up promotion of the digital yuan and focus its efforts on the 2022 Beijing Winter Olympics, a statement issued by the regulator said.

Some commercial banks in Beijing that previously took part in the distribution of digital yuan began to promote their digital-yuan wallets to the general public in recent days, the Global Times learned. In March, some banks in Shanghai began to accept public applications to open digital currency wallet.

A Beijing-based white-collar worker surnamed Li, who has successfully opened a digital yuan wallet within her ICBC digital bank account, told the Global Times on Wednesday that the registration process is quite simple.

"Users just need to click several buttons and the application can be completed within seconds," she said.

The digital yuan wallet supports several functions, including scan to pay, top-ups and money transfers, according to Li. She expected that the digital yuan's rollout would be accelerated so that the wallet could be used in more scenarios.

In a race to gain greater sway in digital-age global governance, China has been steadily expanding its digital yuan pilot programs while also cracking down on cryptocurrencies.

According to the Journal of International Trade magazine, 150 million yuan worth of digital yuan had been given away as of the end of March, with a total user base of 500,000.

Chen noted that as a tool to supervise the economy by the central bank, the use of digital yuan will allow regulators to target specific sectors.

The People's Bank of China, the central bank, earlier said that the test sites and scenarios of digital yuan are expanding in an orderly way, and the total number of test sites had risen to 11 as of October 2020.

The tests covered various scenarios, including physical retailing and transportation fares, as well as online shopping on platforms such as JD.com, Meituan Dianping and Didi Chuxing.