Beijing was ranked seventh among metropolises around the world in an international financial center development index released on Thursday. 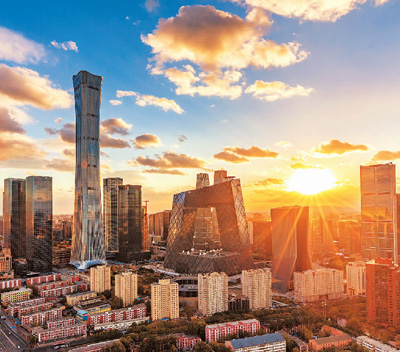 The index, released during the Annual Conference of Financial Street Forum 2021, is a ranking of 45 international financial centers by a research group to evaluate their performances in several dimensions, including the financial market, growth and development, industrial support, service level, and general environment.

All the data used for the rankings came from authoritative international organizations and the global information collection system of the Xinhua News Agency, according to the compiler of the index.

Beijing was ranked seventh in the general ranking. Other cities in the top 10 include New York, London, Shanghai, Hong Kong, Singapore, Tokyo, Paris, Shenzhen, and Frankfurt.

According to the research group, Beijing enjoys a complete set of quality financial resources and accounts for nearly half of China's overall financial assets. The establishment of the Beijing Stock Exchange will make the city better positioned to serve innovative small- and medium-sized enterprises.

In 2020, Beijing topped the ranking of Nature Index Science Cities, demonstrating its advantages in new industrial growth drivers such as the digital economy, trade in services, and sci-tech innovation.

The research group also found that Beijing is becoming a major hub in financial infrastructure, and China's successful response to the COVID-19 pandemic will give the city a more stable environment for the development of the financial industry.