BEIJING, Dec. 9 (Xinhua) -- For some youth traveling to Beijing, a toyshop in the commercial district of Wangfujing is just as enticing as a trip to must-see attractions like the Forbidden City or the Summer Palace. 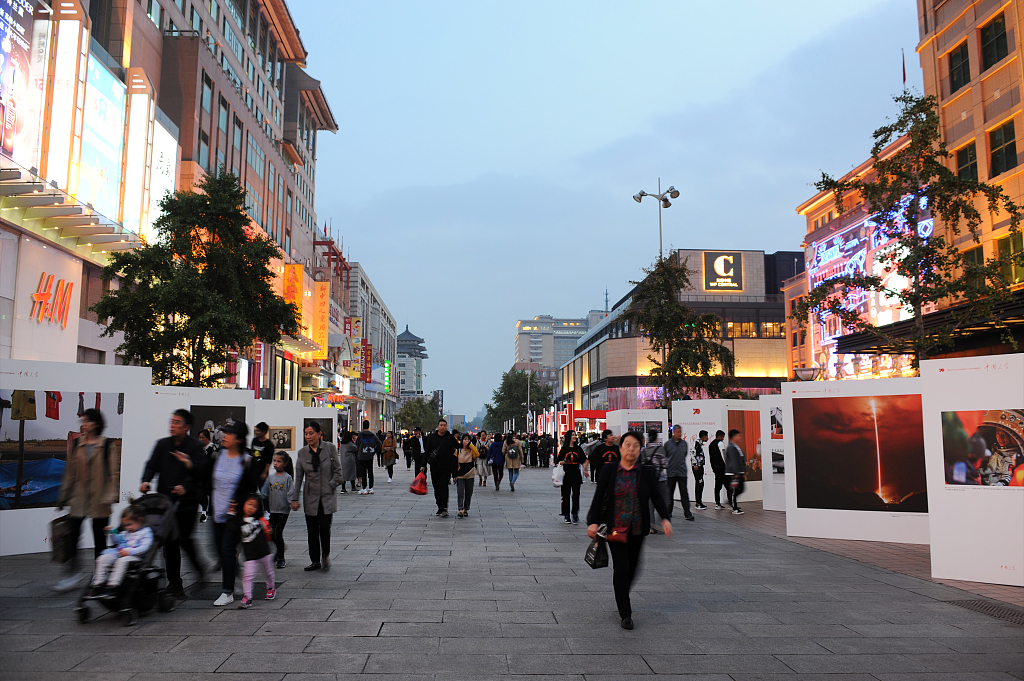 Full of fun and fancy elements including a merry-go-round, statues of Spiderman and various models of racing cars, the three-floor toyshop is a flagship store of Hamleys, a centuries-old British toy retailer.

"I've never been to such a big toy store," said Guo Ziwei, a 5-year-old boy from the northeastern Chinese city of Harbin, who spent an hour in the store with his parents.

The introduction of Hamleys to Beijing is among a series of measures that the state-owned Beijing Department Store has taken to attract more customers and reverse the declining sales due to the shock of e-commerce and consumers' changing habits.

Other measures include an online shop and a digital system to manage all its registered members, which has yielded some progress.

In the first three quarters of 2019, the revenue of Wangfujing Group, the parent company of the Beijing Department Store, stood at 19.4 billion yuan (2.76 billion U.S. dollars), around 6.7 billion yuan more than that in the same period of 2016.

As Beijing's first department store built in 1955, the Beijing Department Store has been struggling to survive, as e-commerce has reshaped the country's retail landscape. Companies sell things online at lower margins, and Chinese consumers have become used to clicking on their smartphones and having their goods delivered to their doorsteps.

Facing the drastic fall in turnover, a number of shopping malls in Beijing have been forced to close or seek reforms in recent years.

In 2017, the North Star Shopping Center in the Asian Games Village (Yayuncun) closed down. In April this year, the 29-year-old Chang'an Department Store announced its closure and renovation plan.

The predicament of the industry has worried the local government. In November, the Beijing Municipal Bureau of Commerce announced that it had listed 10 department stores as pilot stores to be transformed and upgraded, including the Beijing Department Store and Chang'an Department Store.

Chu Zhilei, an official with the bureau, said the government would implement different plans in the 10 stores based on their specific history, location and function.

"There's no cinema and the choices for food are limited in the department store near my office. All I can do is shop. But I would rather do that online," said Liu Yuhao, a bank employee working in the Financial Street area, an economic hub of Beijing.

Guo Zengli, an expert with the retail research organization MallChina, said the challenges facing Beijing's department stores are shared by their counterparts nationwide.

Among them, the online retail sales of physical goods reached 5.78 trillion yuan, an increase of 20.5 percent year on year, contributing 43.7 percent to the rise of the total retail sales of consumer goods.

"Apart from the impact of online shopping, the rise of shopping mall complexes that integrate multiple functions like shopping, dining and entertainment makes the situation of traditional stores even worse," Guo said.

"Department stores became popular at the early stage of China's reform and opening up when people wanted to buy different life necessities in one shop. But nowadays, people visit physical stores for an experience as opposed to simply purchasing goods," said Wan Weiwei, an official with the Beijing Municipal Bureau of Commerce.

Technology application, business diversification and experience consumption are among the new trends of the general merchandise industry, according to a report released early this year by the China Commerce Association for General Merchandise.

Around 59.6 percent of the surveyed department stores and shopping malls have carried out an e-commerce business, while 77.9 percent have tried experience consumption programs, the report said.

"Department stores are still sitting on huge opportunities for growth. The key is to find ways to change. The faster the retailers adapt to people's changing consumption behaviors, the more likely they can grasp the initiative of the fierce competition," Guo said.