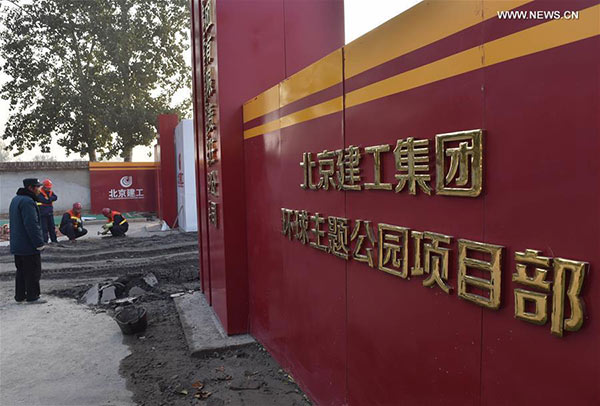 Builders work at the construction site of a Universal Studios theme park in east suburban district of Tongzhou in Beijing, capital of China, Oct. 30, 2016. (Photo: Xinhua)

The park will be the largest Universal theme park in the world after its construction is completed.

The park project was announced in 2014 and is the fifth Universal theme park and the third in Asia.

The new destination will be located in Beijing's Tongzhou district and will be served by a dedicated subway station on two metro lines. The park is expected to host attractions and rides of Universal's big productions including Harry Potter, Minions, Hollywood and Jurassic Park.

Kelly Ryner, president of Thinkwell Asia, a theme park design and production company, said: "The park will fill a huge gap in the market for Beijing, not only for local residents but also will drive tourism."

She said there is such a passion in China for the film industry. The Universal Studios has some exceptional movies that make for world-class immersive experiences."

Ryner said winter weather in Beijing makes it challenging but the design team of Universal Beijing will take that into consideration.

The theme park industry is booming in the country, highlighted by the Shanghai Disney Resort.

The Walt Disney Company has been investing in more rides and attractions at its Disney Resort in Shanghai and in Hong Kong.