Beijing steps up efforts to ensure normal supplies of vegetables 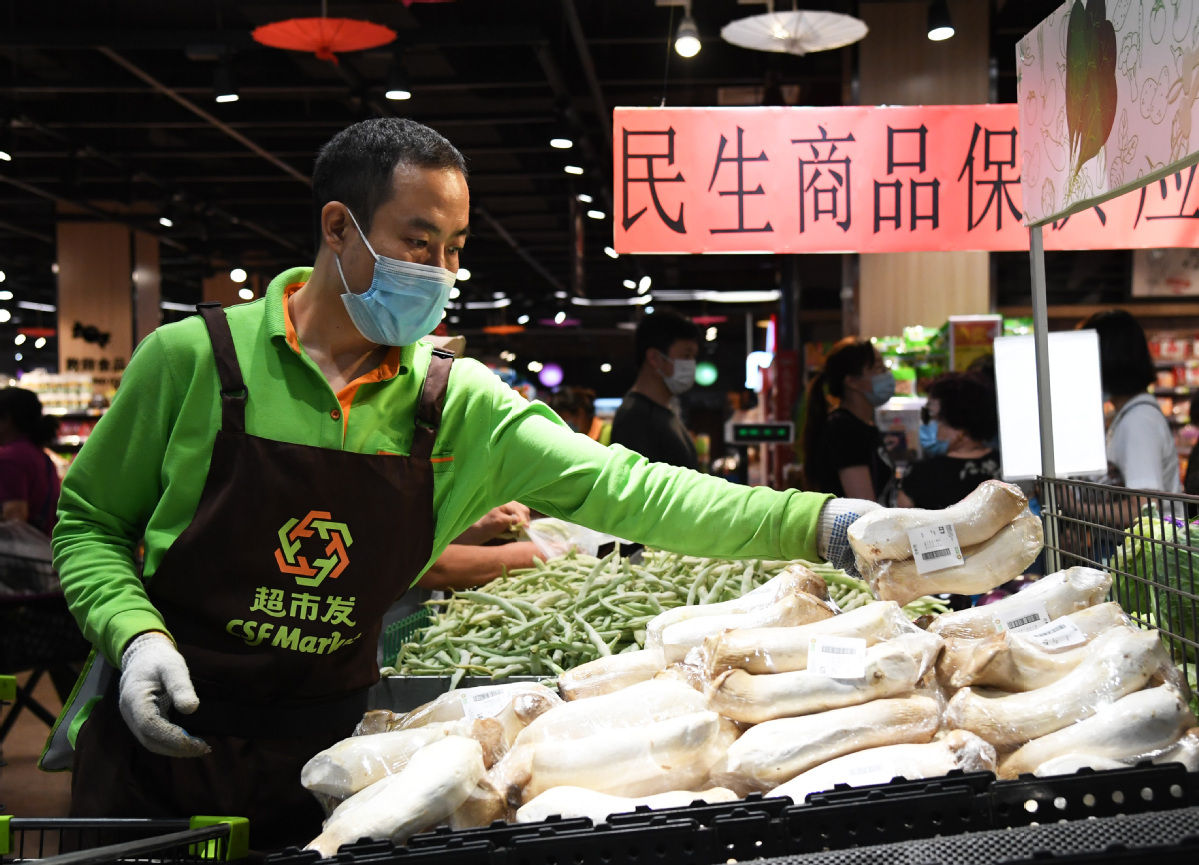 An employee arranges vegetables at a supermarket in Beijing in June. (Photo: Xinhua)

Beijing has adopted measures to ensure vegetable supplies for its residents after the Xinfadi wholesale market suspended operations due to the detection of a local cluster of COVID-19 infections in June.

The major seven wholesale markets in the city raised their daily total supply of vegetables to 15,000 metric tons from 8,000 tons during the past month, the Beijing Municipal Commerce Bureau said on July 25.

"Beijing has been keeping a demand-and-supply balance of vegetables since late June with a daily supply of 20,000 to 22,000 tons," the bureau said.

"The prices of beans, Chinese cabbages and many other kinds of vegetables are even lower than they were in the same period last year when there was no epidemic," said Lin Fan, a local resident in Beijing. "I thought the price would be higher than usual, but it's not actually."

With a size of 1.12 square kilometers, roughly equivalent to 157 soccer fields, the Xinfadi farm produce market used to supply more than 80 percent of agricultural produce for the nation's capital.

The market was immediately closed on June 13 for disinfection after the city reported the first local COVID-19 cases in a new cluster which was related to the market.

Wang Hongcun, an official with the Beijing Municipal Commerce Bureau, said that although the measures taken at Xinfadi affected vegetable distribution, local authorities have been stepping up efforts to coordinate market resources. Food supplies in Beijing can be guaranteed.

The bureau has urgently organized six other large wholesale markets across Beijing to increase supplies and set up a temporary market to stabilize prices.

The Beijing Capital Agribusiness Group set up an emergency vegetable supply coordination office to find supplies in other areas.

On June 18, the first batch of green vegetables from neighboring Hebei province were put on shelves in Beijing's supermarkets. Those vegetables were directly transported from the planting bases in Hebei to Beijing by truck.

Beijing managed to meet demand as 13 provinces are providing vegetables for the city. Large-scale supermarkets in the city have acted swiftly to increase orders from producing areas instead of from the wholesale markets.

The Beijing Jingkelong Supermarket Chain Co tripled direct purchases of vegetables from Hebei and Shandong provinces to ensure stable and orderly food supplies in the capital.

Shi Guoqing, the procurement manager of Carrefour's North China region, made countless calls to increase orders from producing bases on June 12, the day when the first new local case was reported, a report by the Beijing Evening News said.

A total of 18 large-scale supermarkets in Beijing, including Carrefour, all increased direct procurement from producing areas. They also promised together not to raise the prices of at least 10 types of daily vegetables for a month.

City authorities have also been monitoring the price fluctuations of daily products to ensure stable supplies for the public.

Some cities in neighboring Hebei province have taken steps to increase supplies of agricultural produce to Beijing.