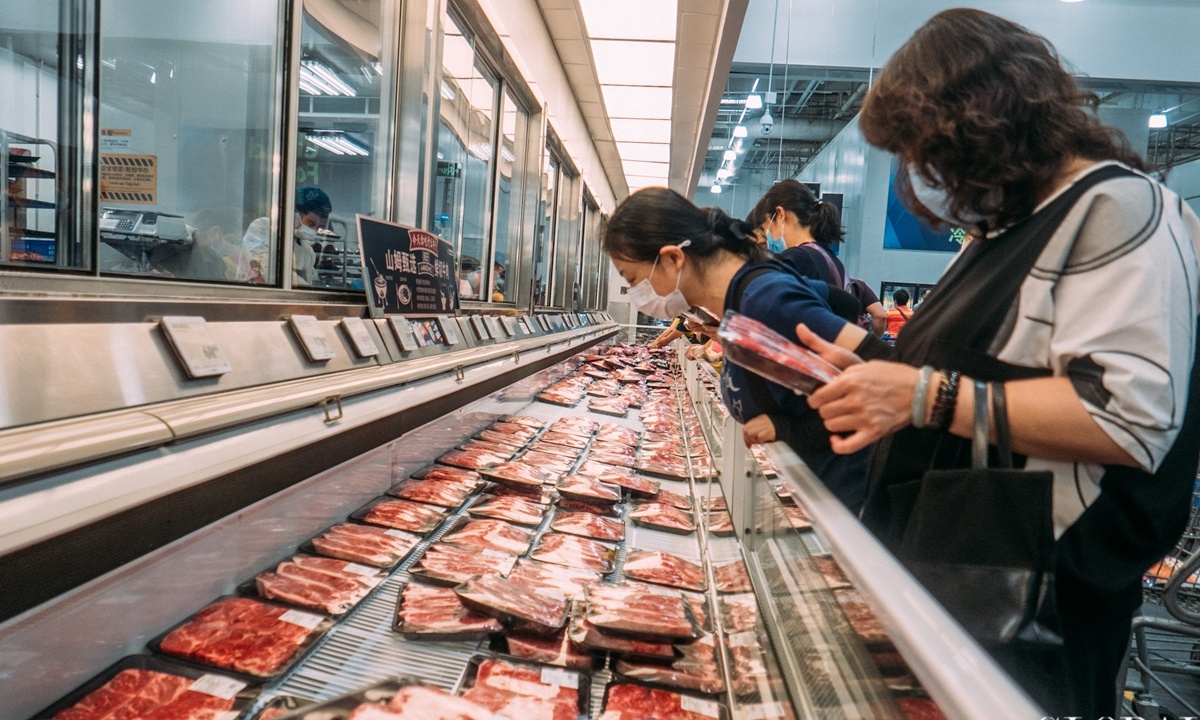 Major supermarkets in Beijing including Carrefour and Wumart stopped selling salmon on Saturday after the cutting boards of wholesalers in Beijing’s Xinfadi Market detected the novel coronavirus, sparking concern that salmon could be contaminated with the deadly virus, despite virologists saying that the coronavirus can’t be transmitted from fish to humans.

When Global Times reporters visited supermarkets in the capital city on Saturday, they found no salmon for sale and many seafood stalls were closed. Local customers appeared hesitant to buy salmon, meat and other seafood.

In the seafood section of a branch of Alibaba’s Hema Fresh supermarket in Chaoyang district, the Global Times found the number of customers appears smaller and no salmon was seen for sale.

A worker at another branch of Hema Fresh near Shilipu area in Chaoyang told the Global Time that their salmon wasn’t supplied by the Xinfadi market and customers could still order the fish through their online app.

Salmons were also available at a Walmart in Beijing early Saturday but staff from the food and drug administration in Shijingshan district had come to the supermarket early in the morning to register the production batch of salmon and meat.

Many shoppers asked supermarket workers about the origin and safety of salmon and meats, the Global Times found.

With heightened concerns over the safety of salmon, a number of Beijing residents recalled recently eating salmon.

“I just had salmon at a sushi restaurant,” said Fan Jingli, a Beijing local. She said she is considering having a nucleic acid test done to rule out the possibility of contracting coronavirus after eating salmon.

Many sushi restaurants in Beijing said their businesses have been affected and they have removed salmon from their menus.

The Chaoshifa Market in Beijing’s Haidian district previously said it had stopped selling salmons. Eighty percent of its branches sold salmon imported from Norway. Chaoshifa Market, a state-owned enterprise in Haidian, has 52 branches in the city.

China imports about 80,000 tons of chilled and frozen salmon each year. Chile, Norway, Faroe Islands, Australia, Canada are the main sources of salmon imports, and the import volume of salmon is increasing year by year, according to news site Jiemian.com.

Lin Li, chief scientist of a team that monitors aquatic disease and control in Guangdong Province, told the Global Times it’s not possible for live salmon to be contaminated with the virus given it lives in the ocean, neither can frozen salmon be a source of the novel coronavirus which can only exist in active cells.

It may be possible for salmon to be contaminated by virus-contaminated water during processing, transportation or packaging, Lin said.

The novel coronavirus is found in mammals, not in fishes, according to a paper published on Asian Fisheries Science in April.

The novel coronavirus mainly affects the upper and lower respiratory tract, and its pathological effects are mainly concentrated in the lungs. Except for a few varieties air-breathing fish, fish have gills not lungs, so they can’t be infected with the virus, the report said.

Salmon and other seafood can’t be the hosts of the novel coronavirus and so cannot be infected with the virus. There are no shared diseases that can be spread from fish to humans, an unnamed virologist was quoted by news site yicai.com on Saturday.

Beyond mammals, the novel coronavirus can hardly infect fish, birds, and reptiles, states another report by researchers from University College London that was published on bioRxiv preprint platform in May titled “SARS-CoV-2 spike protein predicted to form stable complexes with host receptor protein orthologues from mammals, but not fish, birds or reptiles.”

As the cause of the salmon cutting-board contamination remains unknown, experts are advising people not to eat raw salmon for the time being.

Major supermarket chains in Beijing mainly rely on direct procurement, so the supply of vegetables, fruits, meat, rice, flour, grain and oil will remain stable, according to Beijing Youth Daily.

Zhang Hui and Li Hao contributed to the story