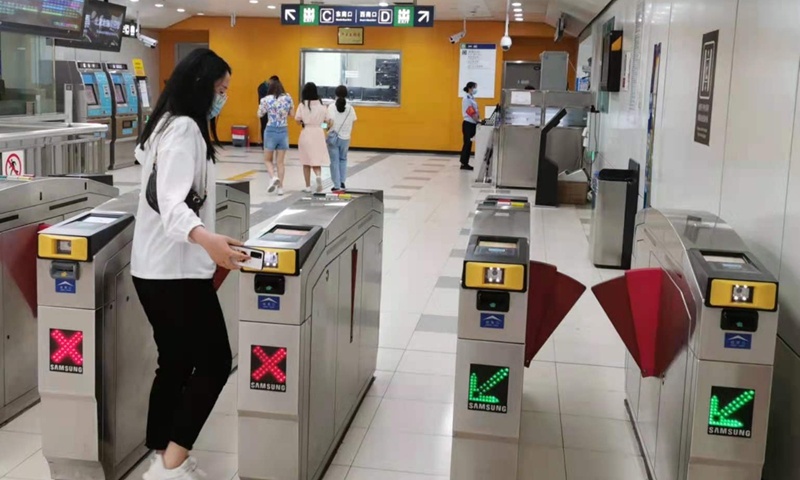 A passenger scans the code at a Beijing subway station on Wednesday. (Photo: Global Times)

Beijing subway officially launched a pilot program on Wednesday that enables passengers to access to the transport service via digital yuan as part of the plan to digitalize transportation services in the capital.

Currently, the service is available at all 24 subway lines and four suburban railway lines in Beijing, according to the Beijing Municipal Commission of Public Transport.

A staff with Beijing rail transit network passenger service hotline confirmed with the Global Times on Wednesday that the service is now opened, and is only available for those with the bank account from the Industrial and commercial bank of China currently.

In the future, Beijing rail transit service providers will further promote the multi-form application of digital yuan in multiple application scenarios, so as to continuously optimize and improve the digital travel experience, media reports.

This came after Suzhou, East China's Jiangsu Province, announced the service launch of using digital yuan to take subway on Tuesday on its line 5, becoming the first of its kind among domestic subway service providers, media reports.

Meanwhile, Chengdu has completed the system construction and preliminary test for the application of digital yuan in public transport, and local residents will be able to use the digital yuan wallet on their mobile phones to take the bus and subway, media reports.

With the continuous expansion of pilot projects and an increasing number of application settings, digital yuan, as a convenient, secure and well-regulated retail payment, will find more uses across all walks of life and help to accelerate the development of China's digital economy, experts said.