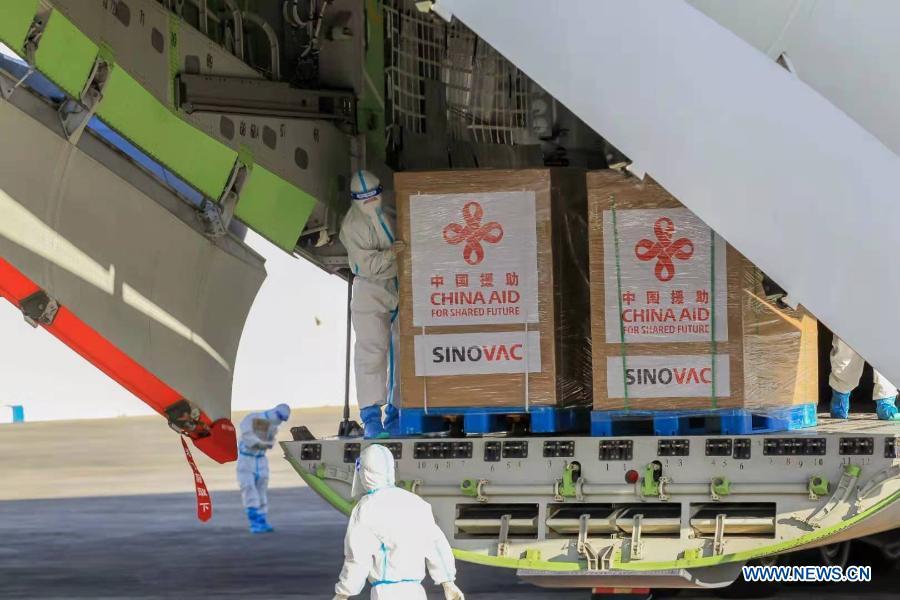 Staff members unload vaccines donated by China at a Philippine Air Force base in Manila, the Philippines on Feb 28, 2021. [Photo/Xinhua]

In the wake of the COVID-19 pandemic, Chinese pharmaceutical companies are researching and developing vaccines with standardized processes, strictly following the scientific rules in place. The regulators concerned have said the inactivated vaccines produced by Chinese companies are safe and effective. The technology of inactive vaccine is mature and has been used in many other vaccines. The transport of the inactivated vaccines does not require ultralow cold chain logistics.

At the request of the World Health Organization, China has decided to provide 10 million COVID-19 vaccine doses to COVAX, in order to meet the urgent needs of developing countries. Based on the BRI cooperation platform, China will offer more vaccine support to more countries, to strengthen efforts toward eradicating the disease.

As China has embraced the dual-circulation development pattern, a new paradigm where the domestic and international economic circulations will be in a symbiotic relationship, with the domestic circulation as the mainstay, the Chinese economy and the world economy can be further accelerated.

China now emphasizes the importance of domestic economic circulation simply because its economic size is super-large with super-high potential for domestic demand. A strong Chinese economy, given its size relative to the global economy, is also good for the world.

Consumption has become the major driving force of economic growth in China. In 2010, consumption only accounted for 49.3 percent of the aggregate GDP, while the share increased to 55 percent in 2016, and further rose to 55.8 percent in 2019, with a slight decrease to 54.3 percent in 2020 due to the pandemic.

From international economic circulation perspective, the Chinese economy has been positively supporting the global economic growth mainly from two dimensions. On the one hand, Chinese imports and ODI keep growing steadily (though there has been a slight slowdown in 2020); on the other hand, Chinese exports and the continuous inflows of FDI into the country are growing.

The BRI is an important platform for supporting the dual-circulation development pattern. China and BRI countries have made great breakthroughs in trade, investment, and cooperation in international industrial capacity.

Owing to the pandemic, many things－people-to-people communication, business between companies, international trade－have changed dramatically. One obvious change is the fast expansion and development of services based on the internet, like online shopping, online education, telemedicine and online games.

In the field of digital economy, China has signed cooperation agreements with 16 countries. It has also built the Silk Road E-commerce Platform with 22 countries. To assist BRI countries fighting the epidemic, Chinese medical specialists have been providing online consultations on prevention, diagnosis and treatment of the disease.

The digital economy has contributed a staggering two-thirds of China's GDP($15.66 trillion in 2020, up 2.3 percent over 2019). This fact could act as an inspirational and achievable benchmark for BRI countries.

One of the major inspirations is that if a developing country can seize the opportunity of promoting digitalization in the new era of the fourth industrial revolution, there would be tremendous development progress. The time frame for modernization would be shortened. Thus, it would better fulfill the requirement of the United Nations 2030 Agenda for Sustainable Development.

To seize the opportunities brought by this digital transformation and fully exploit the BRI cooperation platform, we advocate four vital tasks:

First, improve the effectiveness of the fight against the epidemic using advanced digital technologies. For instance, the health code scanning process widely used in China has been effective in identifying the infection route of the epidemic. Video-conferencing to share the experiences of the fight against the virus, and telemedicine will also help.

Second, while maintaining the normal infrastructure, the importance of "new infrastructure" needs to be emphasized. By building 5G signal stations and many other such advanced infrastructure facilities, keep promoting the digital transition and popularize the technology of smart agriculture, smart manufacturing, smart cities and information-driven society.

Third, in line with the principles of fairness and multilateralism, ensure data safety and security.

China has proposed "Global Data Security Initiative" in 2020, which states that all countries should protect the openness, safety and stability of the global supply chain; the use of information technology should not be abused to damage and steal infrastructure data from others; personal data should not be leaked; mass surveillance over other countries should be banned; and companies should not be forced to reveal their data storage and other sensitive confidential information essential for business secrecy.

Finally, in this fast-developing digitalized time, we should make big efforts to introduce digitalization globally, to ensure some countries and some people do not fall back into poverty due to digital inequality, thereby negating poverty alleviation achieved by other economic policy measures.

The writer is executive dean and professor at Belt and Road School, Beijing Normal University. 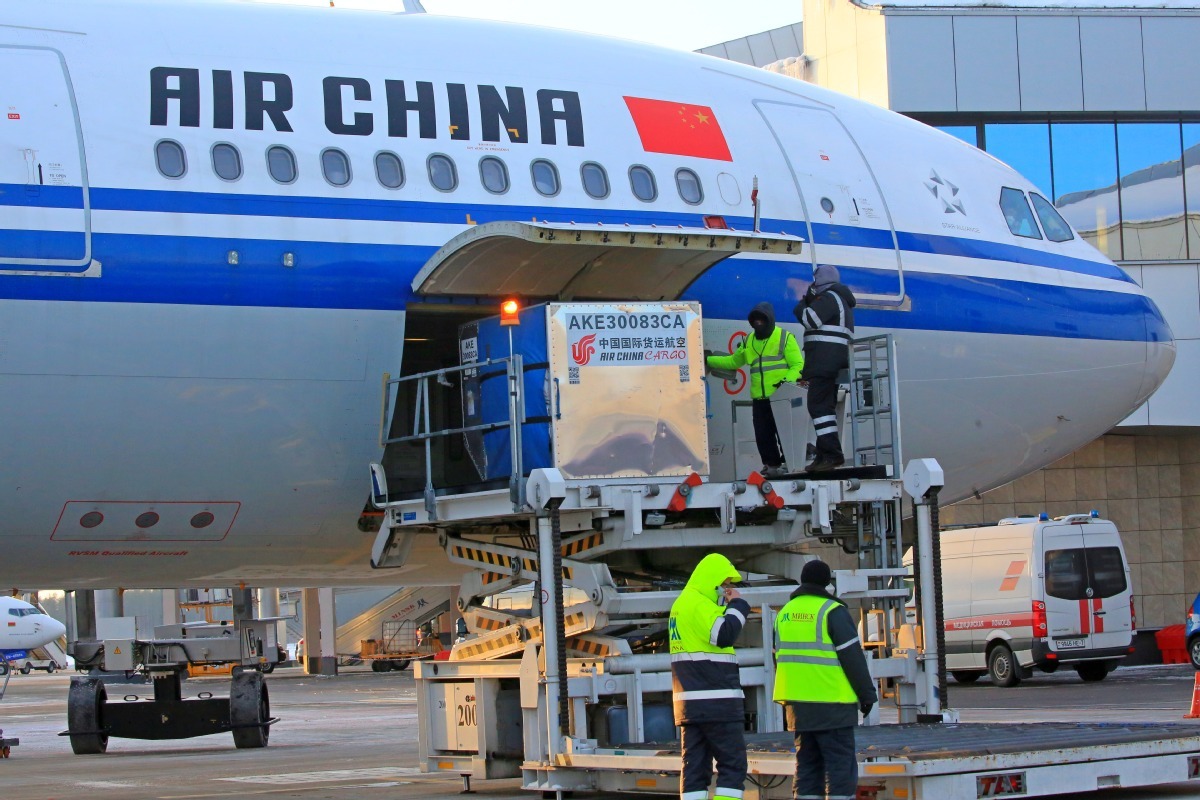 Ground staff at Minsk, Belarus, unload Sinopharm's COVID-19 vaccines, which were donated by the Chinese government, on Feb 19. [Photo/XINHUA]

Recently, media commentary emerging from European countries suggested that the COVID-19 pandemic has caused a sharp reduction of Chinese investment in economies participating in the Belt and Road Initiative.

Some people continue to express concern over a perceived debt issue, while others sought to highlight that coal-fired power plants are being built under the BRI framework.

To be sure, there are others who have taken cognizance of the new economic development opportunities that the BRI would present now as well as in the future, once the dust of the pandemic settles.

A dispassionate overview of the topic, therefore, would be necessary to gain a proper perspective.

No debt trap for participants

In 2020, China's non-financial direct investment in the countries along the Belt and Road reached $17.79 billion, up more than 18 percent year-on-year.

From 2014 to 2020, China's non-financial direct investment into the countries along the Belt and Road reached $104.72 billion, with the annual average hitting $14.96 billion.

The ratio of China's outbound direct investment in the countries along the Belt and Road also increased to more than 16 percent of the country's total ODI in 2020, from less than 10 percent in 2013, when the BRI was first proposed.

No participating economy that undertook BRI-related construction projects has slipped into a debt crisis. Credit for that should go to the Chinese government's three principles relating to the joint projects:

First, China does not force any country to join the BRI. Nor does China force any participating country to borrow money from itself.

Second, all the investment projects are to be carried out by independent companies, as per the existing market rules, and thus government-to-government lending is rare and based on market mechanisms like international market financing and private-public partnership financing.

Third, all the BRI projects are development-oriented to ensure good returns on investment.

But, some critics are quick to cite the case of the Hambantota Port project in Sri Lanka. Not long ago, a senior Sri Lankan government officer went on record that the country's debt to China constitutes just 12 percent of Sri Lanka's total foreign debt.

As for the Hambantota Port project, China Merchants Group purely followed market rules to pick up a 70 percent stake, and to receive the nearby area on a 99-year lease to build an industrial park based on the principles of fair trade. This is actually the best way to pre-empt a debt crisis.

In 2017, 26 BRI-related countries signed an agreement with China on the "guiding principles of Belt and Road finance". In 2019, the "Belt and Road Debt Sustainability Framework" was published by China's Ministry of Finance, providing clear guidelines about the processes and standards of debt sustainability analysis, debt risk analysis, debt capacity pressure test, debt risk management, and so on, for the countries concerned.

Countries that were unable to repay debt at maturity found that China had never made things more difficult for them, but instead actively explored win-win resolution.

For instance, last year, the Chinese government had waived off interest-free loans offered to some African countries, when the loans matured in 2020. To ease the debt burden on developing countries caused by the COVID-19 pandemic, China actively responded to the G20 debt relief initiative, becoming the most generous country among G20 member countries.

In fact, China has helped build many renewable power plants in BRI economies. The power plants already put into use have proved they deliver high economic and social efficiency.

Albeit the fact that China and Pakistan have agreed to build some coal-fired power plants, all these projects were carried out with the most advanced clean coal-fired technologies, to ensure effective control over emissions and energy costs.

In recent decades, China has sought to strictly limit generation of coal-fired energy both within the country and abroad. The "Guiding Opinions on Promoting Investment and Finance to Coping with Climate Change" has stated that any coal-related construction projects shall be strictly limited.

In 2020, the People's Bank of China, the central bank, also revised the "Green Bonds Endorsed Projects Catalogue" so that projects using traditional fossil energy would no longer be supported. Domestic pilot carbon market has traded over 400 million tons, becoming the second-largest carbon market in the world.