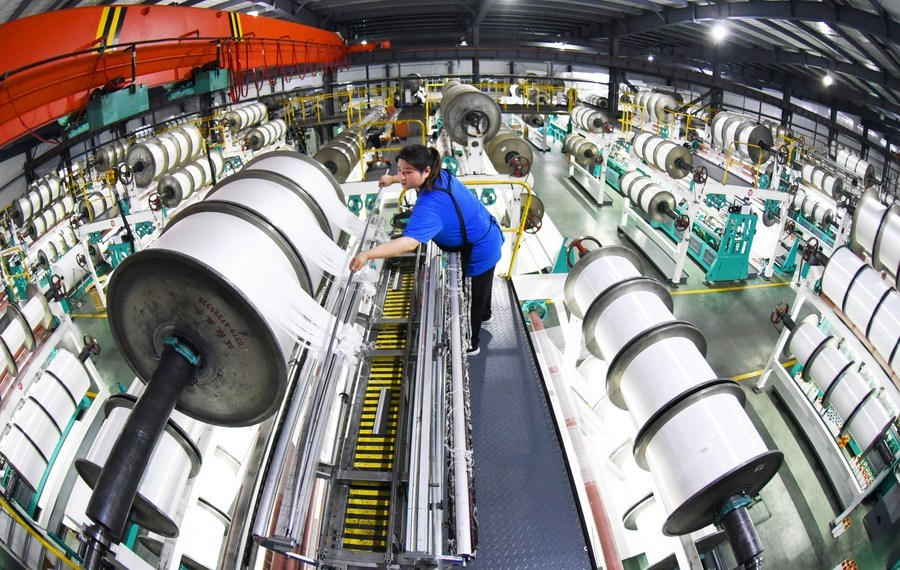 A worker is busy on the production line at the weaving workshop in an economy development zone in Lianyungang, Jiangsu province, on Oct 19, 2020. (Photo: Xinhua)

Monetary authorities in China and the United States have had a more sanguine economic growth outlook recently, sparking more speculation from analysts about a gradual return to normal monetary policies in the future.

China's central bank appeared to be more optimistic on the domestic growth outlook compared with its last meeting in the fourth quarter last year, saying in its statement that growth drivers continued to strengthen and positive factors are increasingly evident.

At the same time, US Federal Reserve Chairman Jerome Powell said before the House of Representatives financial services committee that "the (US) recovery has progressed more quickly than generally expected and looks to be strengthening".

During a later interview with National Public Radio in the US,Powell said the "emergency tools" the Fed used during the acute phase of the pandemic crisis will be gradually pulled back.

"Over time, ... we will gradually roll back the amount of Treasury-and mortgage-backed securities we're buying," he said. "And then in the longer run, we've set out a test that will enable us to raise interest rates."

Monetary authorities in the two largest economies have been aware of the "faster-than-expected" economic recovery, mainly due to the swift and vigorous stimulus for businesses, households and central and local governments. Potential inflation pressure and higher debt levels pushed policymakers to turn the monetary measures back to a normal stance once the economic situations improved solidly, analysts said.

Wang Yiming, a newly elected member of the PBOC monetary policy committee, predicted that if the US economy rebounds faster than expected, the Fed is likely to marginally tighten its monetary policy and that may lead to capital flows out of emerging markets and perhaps a sharp drop in asset prices or even financial market turbulence in these markets.

The recent remarks from the Fed officials indicated that the policy shift may not happen too soon. But if a really strong rebound appears and the inflation index rises rapidly, marginal tightening will be likely, Wang added.

In China, the latest evidence of an accelerated economic recovery came from the National Bureau of Statistics statement released on Saturday. The NBS data showed that major industrial enterprises' total profits reached 1.11 trillion yuan ($169.7 billion) in the first two months this year, increasing by 179 percent year-on-year and up 72.1 percent compared with the figure for January-February in 2019.

Given the rosy economic outlook, the PBOC meeting didn't mention major adjustments of policy rates nor the amount of cash financial institutions must reserve－the reserve requirement ratio. It vowed to use relending and rediscounting facilities, and targeted measures to directly transfer funds into the more vulnerable sectors in the real economy.

A research report by a team led by Ruan Jianhong, head of PBOC's statistics and analysis department, was released on Thursday, estimated that China's potential output growth rate during the 14th Five-Year Plan (2021-25) period is 5 to 5.7 percent, reaching the level of a "medium- to high-speed" growth rate. The projection has taken the impact of COVID-19 into account.

Potential output refers to the maximum output that the macroeconomy can obtain without fueling inflation. The central bank's monetary policy should match the expansion of potential GDP, according to the report.

On Friday, the central bank announced tightening scrutiny on bank loans pumped into the property market in violation of relevant regulations.