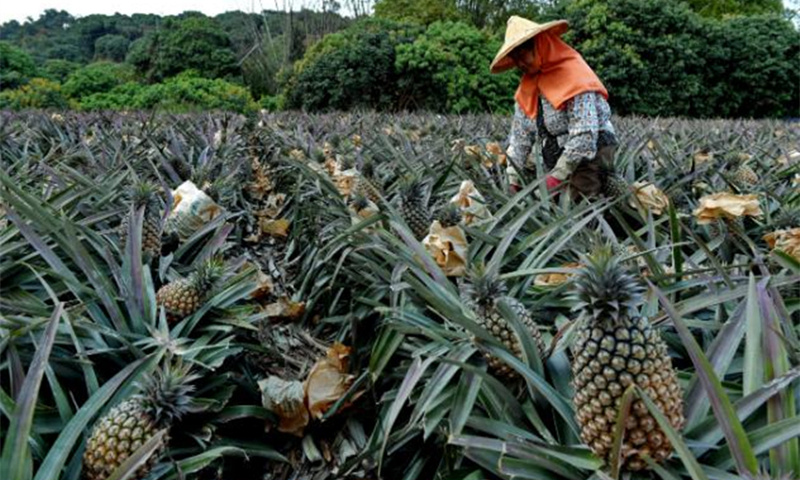 A farmer in Kaohsiung harvests pineapples in March 2019. (Photo: Xinhua)

Exporters in the island of Taiwan should focus all attention on improving fruit quality if they want their products to stand out in the increasingly competitive mainland market, economists say, after Taiwan pineapples were banned in the mainland for quarantine pests detected on the tropical fruit, which triggered some complaints in Taiwan about "political oppression" from the mainland government.

The General Administration of Customs issued a notice on February 26 suspending mainland imports of Taiwan pineapples starting from March 1 after customs inspectors repeatedly found pests such as the planococcus minor on Taiwan pineapples since last year.

In a similar case, Japan also ordered the removal of 750 boxes of bananas from Taiwan due to excessive levels of fungicides, according to a report by taiwannews.com.tw.

According to media reports, some Taiwanese politicians have accused the mainland government of using the ban to punish the island.

Experts and industry insiders told the Global Times on Sunday that the amount of imported Taiwan fruits has dwindled to a minor share of the mainland market in recent years, mainly because of rising competition.

A fruit seller in Shanghai said that transportation costs of Taiwan fruits are high, which pushed their prices up. Also, there is a growing competition, as pineapples from Thailand and Hainan Province have eaten into the market share of Taiwan pineapples which used to be quite popular among mainland customers. "Now, there are almost no Taiwan fruits on the mainland market, except for a few products like sugar apples," he told the Global Times on Sunday.

Hong Tao, director of the Institute of Business Economics at the Beijing Technology and Business University, said that it's necessary for China to tighten quality checks on imported fruits, particularly after the pandemic outbreak.

"However, the Chinese mainland is actually opening up its market for high quality fruits, with the growth of mainland consumption market and opening-up policies," Hong told the Global Times.

According to Hong, because of the inflow of imported fruits, currently there's an oversupply on the market. In terms of pineapples, the mainland has enough production, both in terms of variety and quantity.

"Many Asian countries are now exporting to the mainland the best of their fruits and 'eye-catching' products, whether in terms of taste or appearance. Therefore, Taiwan fruit exporters must increase their product quality if they hope to win the mainland market," he said.