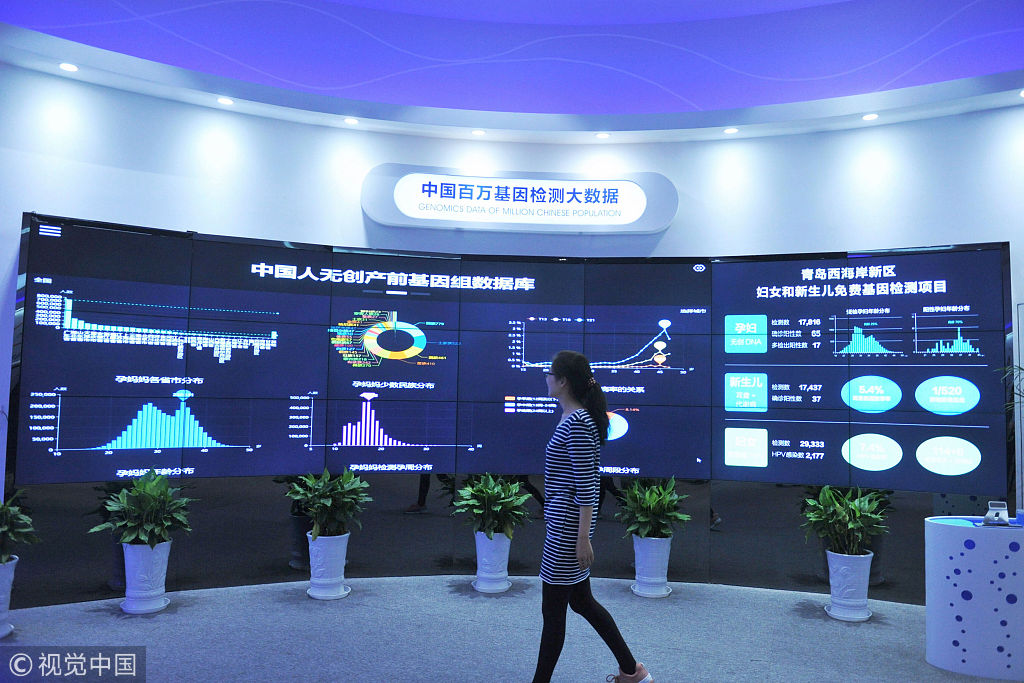 A visitor walks past a board showing big data for genomics in a BGI R&D facility in Qingdao, Shandong province. [Photo by Yu  Fangping / for China Daily]

Chinese genomics giant BGI, known as the Beijing Genomics Institute previously, announced on Tuesday that seven of its executives have decided to increase their equity holdings in the company, after a two-day stock slump triggered by a series of reports attacking its credibility.

A report from tech news site huxiu revealed some newborns with defects were previously assessed as low risk by BGI's DNA-based non-invasive prenatal testing. It took the case of a boy with mental disabilities and physical deformities in Hunan province as an example.

The report also criticized some hospitals and doctors in China, saying they rely too much on BGI's tests, meaning traditional methods, such as amniocentesis, are neglected.

The report captured attention in both the media and the capital market. As a result, the Shenzhen-based company's stock fell by the 10 percent daily limit on Monday and Tuesday. That was despite BGI's statement on Monday that the boy's defects were not included within the range of its gene testing methods.

The company said it had performed DNA-based noninvasive prenatal testing on 3.1 million pregnant women globally by the end of May, and 2.48 million of their babies were born. It also admitted 70 infants with abnormal chromosome conditions were born due for different reasons and insurance was provided for these families.

DNA-based non-invasive prenatal testing is generally used to test for Down syndrome, and 98 percent of fetuses with the condition can be tested, according to a study in the United Kingdom, said Cheung Ching-lung, assistant professor of the Centre for Genomic Sciences at the Department of Pharmacology and Pharmacy at the University of Hong Kong.

However, he said, there are also studies showing the percentage is only 90 percent. Therefore, even if the DNA test shows low risk, he advised pregnant women to also conduct an amniocentesis to confirm the findings. The amniocentesis test alone could work because it has been in clinical application for a long time and the data provided are more adequate, Cheung said.

The DNA-test is not the only doubt about the company's credibility. Suspicions arose last month when a letter, accusing BGI of bribing officials and defrauding State-owned assets, was made public. The genetic institution said the letter contains false information.

In order to "enhance investors' confidence", BGI's executives, including the company's general manager, chief operations officer and deputy general managers, increased their holdings of the stock. The total value is said to be no less than 30 million yuan ($4.47 million).

After the move, the shares of the Shenzhen-listed enterprise dropped slightly by 0.11 percent on Wednesday, closing at 82.98 yuan.

Yet another factor that pulled down share prices was the expiry of the lock-in period for more than 51 percent of its total share capital-worth roughly about 33.2 billion yuan, according to latest closing prices.