Net interest margins of China's four largest State-owned commercial banks fell 8 basis points year-on-year on average in the first half of 2019, as a result of the increase in deposit costs triggered by interest rate liberalization and the lowering of lending rates in support of the real economy, bankers and analysts said. 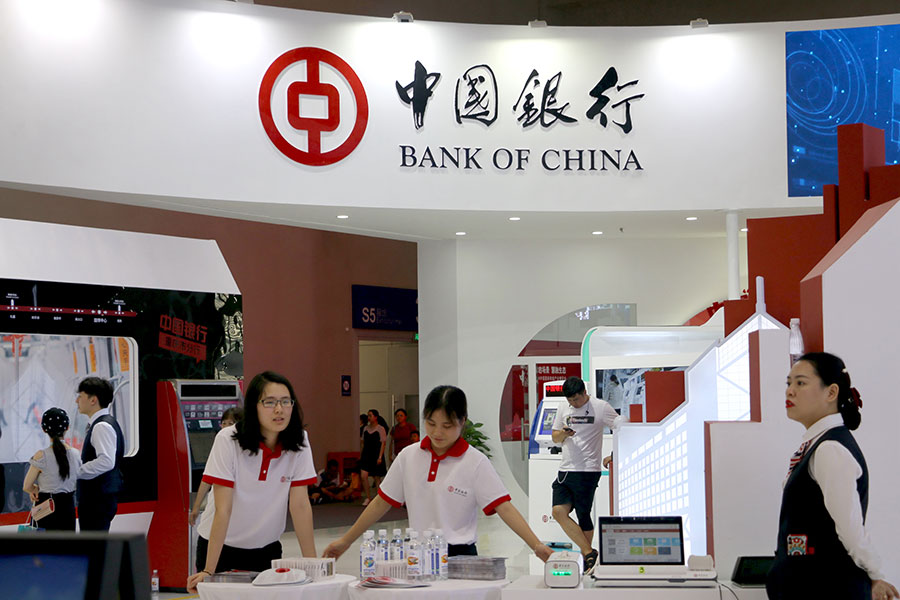 The booth of Bank of China during an exposition in Chongqing. (Photo: China Daily)

During this period, the decline in the net interest margin, the ratio of net interest income to interest-earning assets, of the country's "big four" banks ranged from 1 basis point to 19 basis points.

The NIM of Bank of China Ltd dropped by five basis points year-on-year to 1.83 percent. To stabilize the margin, BOC has optimized the structure of its assets and liabilities and taken measures to control deposit costs, said Wu Fulin, executive vice-president of the bank.

"On one hand, we will optimize our bank's assets structure, offer different pricing strategies to our clients, and realize refined loan pricing management. On the other hand, we will adopt a customer-centric approach, accelerate our push for innovation of a full suite of products, increase customer stickiness, and reduce the cost of funds," Wu said at a news conference announcing the bank's 2019 interim results on Friday.

Over the same period, China Construction Bank Corp's NIM fell 7 basis points to 2.27 percent. Xu Yiming, chief financial officer at CCB, said the NIM decline was mainly caused by increasing deposit costs. He expects that the net interest margin will drop further by 1 or 2 basis points in the second half.

He noted that the current policy of the country is to encourage banks to lower financing costs of the real economy by pursuing less profits in the short run. Surrendering part of the bank profits will certainly affect the short-term profitability of banks. The decline in banks' net interest margins showed that the policy prompting Chinese financial institutions to better serve the real economy is taking effect.

"With a long-term perspective, the drop in bank yields will promote better development of the real economy and therefore help reduce long-term risks faced by banks. The lowering of risks may form a situation for the financial sector and the real economy to give better mutual support to each other. It will help promote steady financial development in the long run," he said.

To cut financing costs for the real economy, China's central bank unveiled a plan to reform the country's loan prime rate mechanism, pushing commercial lenders to use the loan prime rate rather than benchmark lending rate, as a reference to price new loans.

The newly revised LPR will be linked to the central bank's medium-term lending facility, which is determined by broader financial system demand for central bank liquidity.

On Aug 20, the new one-year LPR was set at 4.25 percent, down 6 basis points from the previous 4.31 percent. It was also 10 basis points lower than the existing benchmark one-year lending rate.

"The implementation of the new LPR mechanism is a further step forward for China's interest rate liberalization. If the LPR continues to drop, NIMs of banks will still face downward pressure. It means that banks will keep increasing their efficiency and improving their risk-based pricing capability, in addition to the asset and liability management capability," said Zeng.

According to the estimates of China Construction Bank, the LPR reform will reduce the bank's interest income by less than 100 million yuan ($14 million) this year.

"This will undoubtedly affect our management of the NIM and rate of return to a certain extent," said Xu with CCB.

Over the same period, the net interest margin of Industrial and Commercial Bank of China Ltd decreased by 1 basis point to 2.29 percent. Gu Shu, president of ICBC, said: "We do see that our NIM is under pressure but I don't think we can make an assertion that the NIM has reached its upper limit."

Speaking of the implementation of the new LPR mechanism, he said the impact on the bank's net interest margin will be limited for two reasons.

First, ICBC is familiar with the LPR mechanism. In the first half, the new loans the bank issued by using the LPR as a reference to price loans accounted for 48 percent of its total new loans.

Second, the bank emphasized on arranging its asset structure in accordance with the trends of market interest rate and expanding the sources of low-cost funds by enlarging its client base. Adopting this strategy, ICBC will be less affected by the LPR reform than other banks, said Gu.