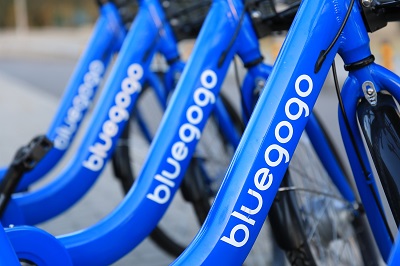 China’s bike-sharing start-up Bluegogo denied reports of bankruptcy on November 1, insisting that its business operates as usual with most of its employees working on field operation and maintenance.

However, no employees were seen at work at company headquarters in Chengdu, capital of Southwest China’s Sichuan Province, local media Chengdu Economic Daily reported on October 31.

The newspaper reported in September that more than 2,000 customers’ requests on deposit refund are seriously overdue, and according to industry sources, the company has been facing a capital strand break since August.

Bankruptcy rumors about Bluegogo swirled in August as it announced to set up more stations in 30 cities in 10 countries after entering the markets of San Francisco and Sydney.

The bicycle manufacturing factory’s staff told reporters that Bluegogo’s order of up to 400,000 bikes had been suspended later in September without any sign of revival.

Chengdu Economic Daily disclosed in September that more than 2,000 customer requests for deposit refund are pending and the company has been stranded by a fundraising problem since August.

Li added that a new round of funding is expected in October. However, there are no updates since then.

Bluegogo is not the first bike-sharing company to run into trouble in the market. Since the top two market leaders Ofo and Mobike have taken a bigger half of the cake, there are more than a dozen companies, including Bluegogo, competing fiercely for the niche market, with most of them ending in failure.

Wukong, 3Vbike and Kuqi Bike went bust a few months after launch. Other bike-sharing companies flounder in a saturated market as continuous investment in daily operations and maintenance hits profits.