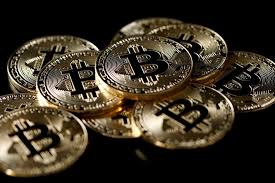 A collection of Bitcoin (virtual currency) tokens are displayed in this picture illustration, in Paris, France, December 8, 2017. REUTERS/Benoit Tessier/Illustration/File Photo

Bitcoin recovered from three-month lows below $6,000 in choppy trading on Tuesday, but worries lingered about a global regulatory clampdown and moves by banks to ban buying bitcoin with credit cards.

Investors swooped in after a steep fall. On the Luxembourg-based Bitstamp exchange, bitcoin hit $5,920, its lowest since mid-November, before recovering to above $7,000 BTC=BTSP. It was last at $7,260 in late morning trading in New York, up roughly 6 percent on the day.

“The recent weakness in bitcoin stems from tightening liquidity and near-term profit taking, and does not reflect a change in the long-term outlook for the digital currency,” said John Sarson, managing partner at Blockchain Momentum LP and ETF Momentum Investing in Indianapolis.

“We view this selloff positively as we believe that lower prices will entice institutions to act quickly to adopt enhanced digital asset services before prices recover.”

Bitcoin has slumped in recent sessions as a risk-off mood spread across financial markets. It has fallen about 70 percent from its peak of almost $20,000 in December and was down nearly 50 percent so far this year.

Other digital currencies also rose after posting steep losses the last few weeks. Ethereum, the second-largest by market value, was up 1.8 percent over the past 24 hours at $751.48, while the third-largest, Ripple, edged up 0.5 percent at 73 U.S. cents, according to cyrptocurrency tracker coinmarketcap.com.

The gains came amid a U.S. Senate hearing on virtual currencies in which J. Christopher Giancarlo, chairman of the Commodity Futures Trading Commission (CFTC) and Jay Clayton, chairman at the Securities and Exchange Commission (SEC) have been testifying. The Senate is examining the role of the SEC and CFTC in regulating virtual currencies.

After a massive run-up last year, in which investors across the world piled into the market, cryptocurrency prices have skidded lower while regulators have stepped up warnings about the risk of investing in them.

Regulatory clampdowns in South Korea and India and an advertising ban by Facebook Inc (FB.O) have hit sentiment. Several banks said in recent days that they were banning customers from buying cryptocurrencies with credit cards.

Still, many cryptocurrency backers said regulation should be welcomed and short-term price volatility is to be expected for a new market.

Iqbal Gandham, managing director at trading platform eToro said his company had seen a drop in trading interest from investors in recent weeks amid the selloff, but that interest remained far higher than before the fourth quarter of last year.

The plunge has come during a heavy selloff in global stock markets in recent days, undermining views that bitcoin’s price moves are generally uncorrelated to those of other asset classes.