Blockchain hailed as next innovation frontier 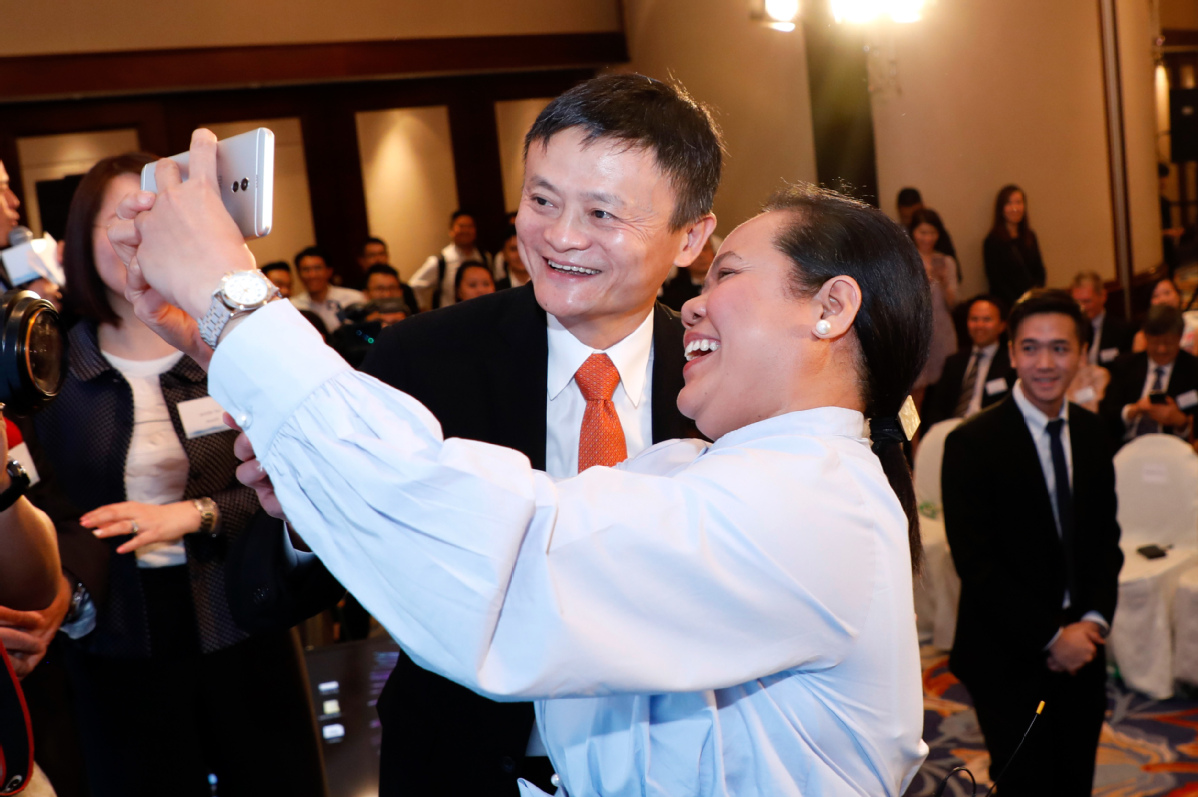 Jack Ma, founder and chairman of Alibaba Group Holding Ltd, poses for a photo with the first user of blockchain-enabled AlipayHK in Hong Kong on June 25, after she sent money through AlipayHK to Gcash, a Philippine e-payment application, at the launch event of the cross-border e-payment service. [Photo/XU KANGPING FOR CHINA DAILY]

As virtual currency bitcoin has gradually become a household name, there has been much discussion about the potential of blockchain, the digital technology that underpins such cryptocurrencies, emerging as the next frontier of innovation.

Blockchain's hallmark is decentralization. Data can be shared among a distributed network of computers with no need for middlemen. Once recorded in a blockchain-based ledger, data is hard to tamper with.

"In the next three years, blockchain technology is forecast to be widely adopted in sectors such as product traceability, copyright protection, bill verification, precision marketing, energy and healthcare in China," said Yu Jianing, director of the Institute of Industrial Economics at the Ministry of Industry and Information Technology.

"Blockchain has the potential to transform the way that individuals and organizations interact, the way that businesses collaborate with one another, the transparency of processes and data, and ultimately, the productivity and sustainability of our economy," Steve Lark, partner of Technology Consulting Deloitte, said in a recent report. "It can be used across the entire value chain, benefiting businesses and consumers alike."

So far, a complete value chain for the blockchain sector has emerged in China, ranging from hardware manufacturing, platform and security, to application services, investment, media and human resources, according to the white paper released by the Information Center with the Ministry of Industry and Information Technology.

According to the report, the number of blockchain technology companies in China exceeded 456 as of March. They are exploring ways to apply blockchain into a wide array of areas.

Some startups hope the technology can help transform the intellectual property industry. With blockchain technology, online content such as novels and musical compositions can be copyrighted as soon as the owner creates them. Reprints or citations are allowed only with the owners' approval, otherwise copycats can be sued for infringement.

Chinese startups Beijing Banquanjia Tech Co and Yuanben Blockchain Co are at the forefront of creating such solutions.

Blockchain technology could also see widespread adoption in intelligent industries, according to Wang Feiyue, director of the State Key Laboratory for Management and Control of Complex Systems of the Chinese Academy of Sciences.

Wang said blockchain technology could lay a solid foundation for the development of automation and intelligent industries, in terms of data security and trust.

He said smart contracts－the coding on the blockchain that allows transactions to take place－can help deal with the uncertainty and complexity of the real world, while enhancing reliability.

Wang likened the innovations of blockchain to the groundwork for the construction of tall buildings.

The year 2017 marked the peak year for blockchain development in China, with 178 new companies in the sector. Investors flocked into the market with nearly 100 equity stock investment deals in that year alone, a record in recent years. Between January and March this year, the number of equity investment deals exceeded 68.

The new service－claimed to be the first of its kind in the world－tests the huge potentials of blockchain technology, allowing users to send and receive money within seconds. "At the same time, such technology can help establish a reliable platform for government supervision of food safety. The quality of life of Chinese and even global consumers can be improved," Li said.

Still, blockchain technology is in its nascent stages. A report from Deloitte said a return on any investment and the full value of implementing a blockchain strategy might not be felt for a number of years, given the technology has only reached its early stages and expertise in the area is limited.

Yuan Peizhang, product manager of Beijing Chilun Yichuang Technology Co Ltd, said the blockchain technology in itself is not a problem, but companies should not use it as a gimmick to commit fraud.

"Most people lack basic understanding of this new technology, as hardly any courses on it can be found in higher education institutions," Yuan said. "Many companies are using the blockchain concept as a gimmick, but what they actually do has nothing to do with blockchain."

To further drive the sustainable development of blockchain, the central authorities have expedited the creation of guidelines and standards for the technology.

In December, the Standardization Administration of China approved a project to establish the country's first national industry standards for blockchain technology.

The standards are expected as soon as the end of 2019, according to the Economic Information Daily, citing Li Ming, director of the blockchain research institute at the Ministry of Industry and Information Technology. They will cover operations and applications, processing and methodology, and information security.