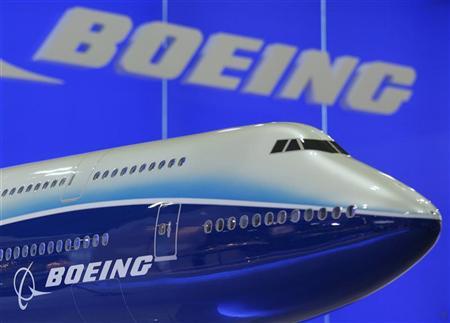 Boeing Co (BA.N) on Wednesday forecast full-year profit well above Wall Street estimates as it looks forward to its busiest year ever for plane deliveries, sending its shares up almost 6 percent.

The world’s biggest planemaker said it aims to ship between 810 and 815 commercial aircraft in 2018, as much as 6.8 percent more than the industry-record 763 jets it delivered in 2017, putting it ahead of European rival Airbus (AIR.PA) for the sixth year in a row. Airbus delivered 718 jetliners last year.

Both companies are speeding up production at their factories to chip away at the large backlog of orders for new jetliners, created over the past few years as airlines want new, fuel-efficient planes to cope with a surge in demand for air travel.

For the fourth quarter ended Dec. 31, Boeing’s core earnings nearly doubled to $4.80 per share from $2.47 a year earlier, buoyed by rising plane output and a gain from changes to the U.S. tax law.

Boeing’s commercial planes unit posted an 8 percent increase in revenue in the fourth quarter to $15.47 billion, while operating profit rose 50 percent to $1.78 billion.

Boeing’s new services business - which maintains and overhauls planes for their owners - posted a 17 percent increase in revenue to $4 billion in the fourth quarter while operating profit rose 9 percent to $617 million. Boeing is aiming to hit $50 billion in revenue in that business by 2027.

However, profit margins at the unit narrowed slightly to 15.4 percent, and Boeing said it expects margins near that level this year.

“Margins weren’t as good as I thought,” said Sheila Kahyaoglu, an analyst at Jefferies LLC in New York.

“Actual results could ultimately be higher,” Seth Seifman, an analyst at JPMorgan, said in a note to clients. “As a result, we expect the stock to outperform despite its recent run now that management has set the table for a solid 2018.”

By raising production while holding down costs, Boeing and Airbus generate more profit and cash. Despite the rising output, their order backlogs have kept growing. Boeing said its total backlog, which includes military aircraft and other products, rose to $488 billion at year-end, compared with $474 billion at the end of the third quarter.

Boeing’s core earnings for the latest quarter included a one-time tax gain of $1.74 a share due to the lower U.S. corporate tax rate signed into law last month reducing its deferred tax liabilities in the future.

Excluding the gain, Boeing reported earnings of $3.06 a share. On that basis, Wall Street had been expecting $2.89 a share.