Bank of America (BAC.N) reported a 34 percent rise in first-quarter profit on Monday, topping Wall Street estimates, as the lender benefited from higher interest rates and growth in loans and deposits. 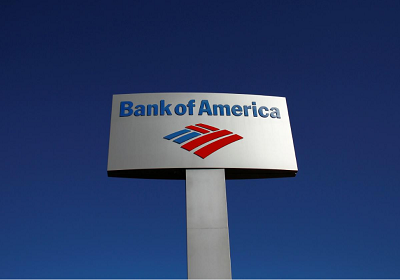 A Bank of America sign is displayed outside a branch in Tucson, Arizona January 21, 2011. (File photo: Reuters)

Shares of the second-largest US bank by assets rose 1 percent in premarket trading. They have gained 33 percent in the past 12 months, but fell about 3 percent along with other US banks on Friday.

BofA’s net interest income rose 5 percent in the first quarter, pushing total revenue up 4 percent to $23.28 billion. The lender relies heavily on higher interest rates to maximize profits as it has a large stock of deposits and rate-sensitive mortgage securities.

The only business to record a fall in revenue was global banking, hurt by lower investment banking fees.

The bank’s efficiency ratio, a closely watched measure of revenue divided by expenses, was 60 percent in the first quarter, down from 63 percent a year earlier. A low ratio indicates a bank is more efficient.

The bank, however, underperformed in fixed income, currency and commodities (FICC) trading because of a decline in bond issuance from corporations, Chief Financial Officer Paul Donofrio said on a call with journalists. Less bond issuance can, in turn, affect credit trading in secondary markets.

Net income attributable to shareholders rose to $6.49 billion from $4.84 billion a year earlier. Earnings per share rose to 62 cents, beating the average analyst estimate of 59 cents, according to Thomson Reuters I/B/E/S.