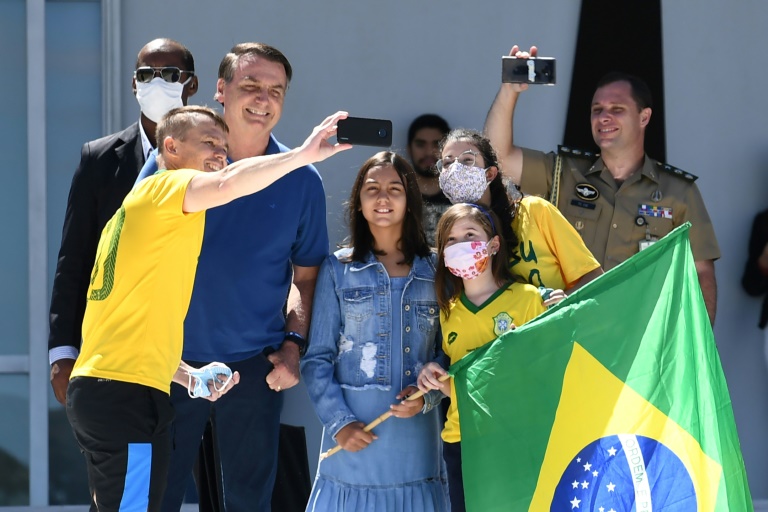 Brazilian President Jair Bolsonaro and his daughter Laura (C) pose for a selfie with supporters outside his residence in Brasilia on Sunday.(Photo: AFP)

Brazil's President Jair Bolsonaro railed against the country's lockdown Sunday in a speech to thousands of anti-confinement demonstrators as the number of confirmed COVID-19 infections passed 100,000, with more than 7,000 deaths.

Bolsonaro blamed state governors for continuing the lockdown in a speech outside his presidential palace in Brasilia.

"The destruction of jobs by some governors is irresponsible and unacceptable. We will pay a high price in the future," the head of state said in a speech broadcast live on Facebook.

Bolsonaro has repeatedly clashed with state governors, insisting that strict containment measures they are imposing are an overreaction, and damaging to the economy.

The country registered 101,147 confirmed cases of the virus by Sunday, according to figures released by the Brazilian health ministry, with 275 deaths from COVID-19 within the previous 24 hours.

Experts believe the overall number of COVID-19 cases could be 12 to 15 times higher, due to a large number of undetected cases given the lack of testing availability across the country's 210 million population.

The demonstration in Brasilia drew a larger crowd than similar protests in recent weeks, and many people held up banners criticising Bolsonaro critics Rodrigo Maia, head of the chamber of deputies, and former justice minister Sergio Moro who resigned last week. Others in the crowd called on the army to intervene.

"The people are with us and the army is on the side of the law, order, freedom and democracy," Bolsonaro told them.

The Estado de Sao Paulo daily, one of the country's biggest newspapers, reported on its website that one of its photographers and his driver were attacked by demonstrators, who pushed and kicked them.

Contrary to recent demonstrations in which he made an appearance, the far-right president -- who did not wear a mask -- maintained a distance of around two meters (six feet) from his nearest supporters after his address outside the presidential palace.

However, he made an exception for supporters who joined him for a selfie with his nine-year-old daughter Laura.

Experts are bracing for the biggest outbreak in South America to get far worse, as the peak of the pandemic is thought to be some weeks away.

Last week, Rio de Janeiro state said it would extend stay-at-home orders until May 11, ignoring Bolsonaro's demands that local and state authorities encourage Brazilians to get back to work.