Bookmakers at an "emergency summit" this month will be trying to find a way to "survive the slump" triggered by the coronavirus pandemic. 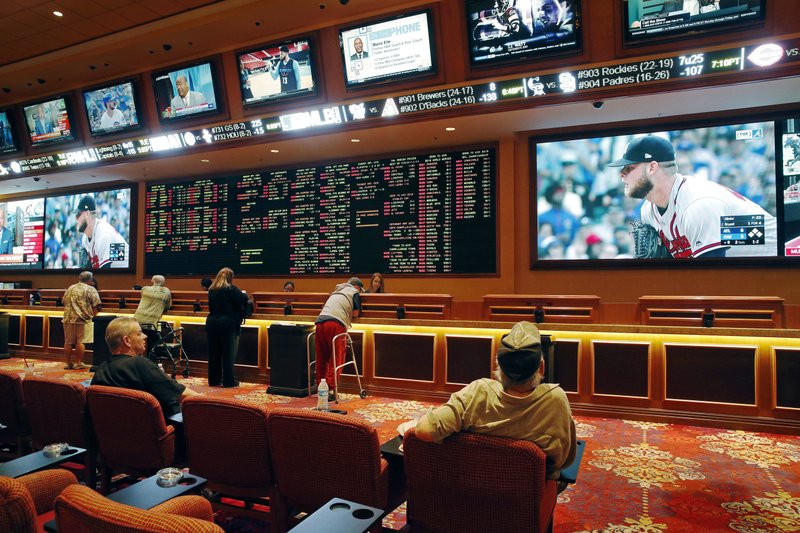 In this Monday, May 14, 2018 photo, people make bets in the sports book at the South Point hotel and casino in Las Vegas.

Racing and football, bookmakers' two key sources of revenue, have come to a standstill across Europe since mid-March with betting shops also closing due to British Government social distancing rules.

Any industry that had to suddenly withdraw its main product from the market would suffer a huge hit, Andrew McCarron, managing director of Sports Betting Community (SBC) told AFP.

The SBC Digital Summit that runs from April 27 to May 1, will feature 140 speakers including more than 20 CEOs of major bookmakers from across Europe, the United States and Latin America.

"It is probably fair to describe this as an 'emergency summit', as the central theme across all five days is how to survive the slump and bounce back once conditions allow normal business to resume," McCarron said.

"CEOs from many leading operators around the world are taking part so we'll definitely see a lot of good ideas shared.

"Given the unique circumstances, I think there'll also be discussions about how companies can work together for the long-term good of the wider industry and its customers."

The 43-year-old Englishman says the heart has been ripped out of the UK sporting calendar showpiece events -- The Grand National, Wimbledon and The British Open all cancelled -- taking with it a huge source of revenue for bookmakers.

"Any business that is suddenly forced to remove its main product from sale is going to have a major problem, and that is the situation bookmakers find themselves in," he said.

"UK punters stake around £250 million ($312 million) on the Grand National alone, and that kind of income is impossible to replace."

McCarron said online firms were trying to cut their cloth accordingly and offer different things to bet on.

"Online sportsbooks have been proactive in trying to replace the traditional sporting calendar with things like virtual sports, esports betting and, the surprise hit, markets on table tennis tournaments," he said.

However, he says that punters largely are creatures of habit so whilst the online bookmakers can be credited with being innovative the rewards go nowhere near replacing the losses in income.

"While virtuals and esports betting are growing in popularity, fewer people are prepared to bet on events they have little knowledge of and no emotional attachment to," he said.

"The alternatives can't make up for the loss of the casual customers who have a weekly football accumulator, a couple of bets on Saturday afternoon's televised racing or a punt on the weekend's big fight."

McCarron says the example of GVC Holdings -- which owns bookmakers Corals and Ladbrokes -- reflects the stark reality of life for the gambling industry at the moment.

"GVC Holdings estimates that the crisis will cost it £50million a month, and that's taking into account what it described as a program of ‘mitigating actions'," he said.

"Even for a financially robust business -- one that also has revenue streams from online casino and poker -- that kind of hit is difficult to sustain for a prolonged period."

For the retail outlets a lot will depend on what is offered after the pandemic is over.

"Their future depends not only on the return of sport, but also on what kind of economic stimulus will be available post-outbreak," he said.

Bookmakers are not high on the list of professions the public would sympathize with over their suffering but McCarron thinks they deserve some.

"It is slightly unfair," he said of the lack of sympathy.

"In the UK alone, the gambling industry employs more than 100,000 people, has 10,000 premises and contributes £2.9 billion a year to the taxman just in gambling duties.

"Just this month the bookmakers got together over the Virtual Grand National and raised £2.6 million for NHS charities at a time when their businesses were really suffering.

"Betting is a form of entertainment enjoyed by millions of people.

"The industry has its problems, but it also has plenty of positive aspects as well."