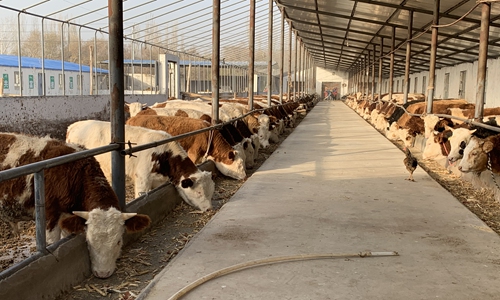 With the opening of a local customs clearing center and links to the China-Europe freight train route, Aksu, a trading hub in Northwest China's Xinjiang Uyghur Autonomous Region, witnessed 18-percent surge in foreign trade volume in the first 10 months of 2019, in particular to Russia and Central Asian countries.

While foreign trade now only accounts for less than 1 percent of Aksu's GDP, room for expansion is being unleashed as more policy packages take effect, officials said. The export of agricultural products such as apples and nuts will drive a complete industrial chain, boost local employment and bring stability to southern Xinjiang, a region once hit by terrorism and extremism.

"Shipments of our fruit juice to Russia have been growing this year after Aksu got on the China-Europe freight train route. We plan to export 12,000 tons of apple juice to Russia by the end of 2019," Li Judong, general manager of Aksu Hengtong Juice Co, told the Global Times on Thursday.

The value of such exports to Russia is about $14 million, compared with the company's total exports of $11 million last year. In past years, Hengtong primarily focused on export markets in Australia, Japan and the US.

So far, Hengtong has shipped about 4,000 tons of apple juice to Russia through two cargo trains bound to the European continent. The remaining order is expected to be transported by another four China-Europe freight trains, according to Li.

Hengtong is just an example of how improved logistics services in southern Xinjiang are helping local exporters to nurture new business and gain new markets in Russia and Central Asia. In September, the Aksu railway station was approved to link directly to the China-Europe freight train route via a model of consolidated loading and shipping in southern Xinjiang. The trains, which departed from Urumqi Western station, operate two times a week.

According to Li, the cost of shipping this way is 30 percent lower than that of inland shipping, not taking into account subsidies that local governments offer to export companies. The transportation time is also slashed by 20 percent.

In the past, goods were usually shipped abroad through Alashankou port or Tianjin port in North China's Tianjin Municipality, and sometimes it could take up to two months for goods to be cleared there.

"Local customs will allow manufacturers to respond to clients' demand in a swifter manner," You Jianjun, general manger of Aksu-based Shenghe Logistics, told the Global Times on Wednesday.

In the first 10 months, Aksu's foreign trade rose 17.9 percent year-on-year to $285 million. Of this, exports soared 10 percent to $265 million, led by growth in fresh agricultural products such as apples, according to data provided by Aksu's foreign trade bureau. Last year, Aksu exported about 2,000 to 5,000 tons of apples.

The company also creates 200 jobs for rural workers and minority groups every year, helping lifting local people out of poverty. Downstream industries including transportation, packaging and warehousing also flourish in Aksu on the heels of booming foreign trade.

Foreign trade only represents less than 1 percent of the GDP of Aksu, which is eclipsed by consumption and investment, according to Kahaerjiang Kuerban, an official of Aksu's foreign trade bureau. Last year, foreign trade accounted for 6 percent of Xinjiang's GDP.

"We will take more measures to leverage Aksu's geographic advantage in the Belt and Road Initiative into full play. We also encourage textile companies to develop more high value-added products for export," Kuerban told the Global Times on Wednesday. The bureau now provides platforms to organize local companies to join exhibitions in Russia and Kazakhstan.

Local players also long for the opening of a port in Aksu. Studies on the feasibility of the port, which would be located 70 kilometers from Wushi county under the administration of Aksu Prefecture, have been in progress for years, but it is not clear when the port will open.

"This port, once operating, will be a shortcut to Central Asia. About 90 percent of the cargo originating in southern Xinjiang could be shipped abroad through the port, saving a lot of transportation time," You said.