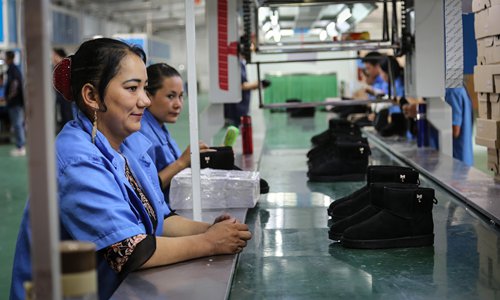 A 23-year-old man surnamed Tohtimamat deftly cemented shoes in a production line at a shoe factory, Yuanfa, located in Moyu county of Hotan. He said he feels happy that he can earn a monthly salary of more than 1,500 yuan ($218.30).

"If I hadn't come to work here, I would have stayed at home or been a farmer like my parents, and this job has helped us to get out of poverty," he told the Global Times on Wednesday.

After a few months of skill training, Tohtimamat has now become a professional worker in the shoe production line, and he said he hopes to work harder so that he can earn more money to be able to get married.

As a poverty-stricken area, Hotan faces a harsh natural environment, lack of education, and has a heavy reliance on agriculture. In recent years, several prominent Chinese economists have suggested the labor-intensive industries in the eastern regions of China should shift toward western provinces. Hotan could be a pilot area to see poverty alleviation empowered by industries.

Today, in the middle of vast deserts in Hotan, a growing number of industrial parks and plants are a common sight, with supporting facilities such as staff dormitory buildings. Many locals see them as "oases in the desert" that bring people new hope for a better life and happiness.

After more than 30 years of rapid growth, industries in regions such as East China's Zhejiang Province and South China's Guangdong Province have seen rising labor costs as the population dividend is diminishing. With improving infrastructure in Xinjiang in recent years, the much lower labor cost and favorable subsidies, more companies are now investing in Hotan while industry clusters have begun to take shape.

Meanwhile, the China-proposed Belt and Road Initiative and the China-Pakistan Economic Corridor also offer significant opportunities for the prefecture's new opening-up, as its rail connection with Pakistan and Kyrgyzstan in the future could facilitate cargo trade from Central Asia and Central Europe.

"I've been here every year for the past six years, and I see such a huge change with the industrial development in the area," Tang Min, who focuses on poverty reduction at the Counselors Office of the State Council, told the Global Times on Wednesday.

A major problem the local economy had faced was a surplus workforce of about 600,000. Investment in labor-intensive sectors helps create jobs here, thereby lifting people out of poverty, he said.

For a better life

In a plant in Hotan, roughly 200 workers can be seen sitting in front of operation desks, concentrating on their work, while several managers occasionally give instructions.

"Many workers here are from the ethnic minority groups, who may face language barriers during skill training, but they learn very quickly," said a manager at Hedeli, a shoe company from Southwest China's Sichuan Province that opened a new plant in Hotan few months ago.

Various posters on the wall to inspire workers read, "One man employed, a whole family out of poverty," and "Hard work creates happiness," in both standard Chinese and the language of local ethnic groups. After several months of training, workers can earn more than 1,500 yuan per month, and they will be paid more if they work harder.

In the last two years, more factories from eastern cities have come to invest in new plants in Hotan, with supportive policies such as skill training subsidies, cargo transport, electricity utilities and so on. For instance, if the shoe factory launches a skill-training program, it will be granted a subsidy of 2,400 yuan per person, according to local authorities.

In 2018, a total of 200,800 people have been lifted out of poverty. Urban households in the prefecture saw their disposable income grow by 8 percent year-on-year in 2018, up to 28,610 yuan per year, and rural households saw a growth rate of nearly 9 percent, according to data released by the Hotan government in April.

New round of opening-up

The companies investing in Hotan, which produce items including shoes, textile products, accessories and even wigs, mainly export their products to overseas markets.

Since Yuanfa's factory began operations earlier this year, it has now received orders for 920,812 pairs of shoes. The Wenzhou-headquartered firm has seen its shipping route to Russia shortened, as the manufacturing base in Hotan is closer to target markets when the company ships its products through the Khunjerab Pass, which links Xinjiang and Pakistan to other regions. 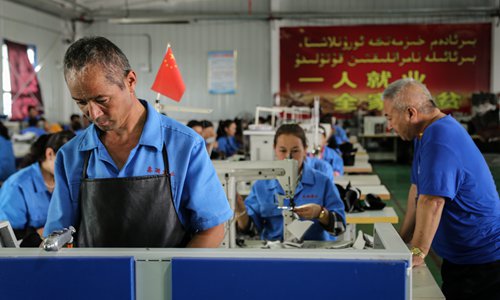 Local workers busy working at a shoe-making production line in Hotan, Northwest China's Xinjiang Uyghur Autonomous Region. Photo: Chen Qingqing/GTWhile China, Kyrgyzstan and Uzbekistan recently agreed to push forward the China-Kyrgyzstan-Uzbekistan railway, Hotan has set its sights on becoming a major city along the route, which is soon expected to be the shortest route for cargo transport from China to Europe and the Middle East. (Photo: Global Times)

"Hotan is in an early stage of a new round of opening-up and reform, with booming industries that can easily recruit workers with a low technical barrier," Liu Yi, a professor at Peking University, told the Global Times on Wednesday.

Still, to become a major manufacturing hub, Hotan still needs a supply chain to support it and must design a sustainable growth model for the region's long-term development, she said. 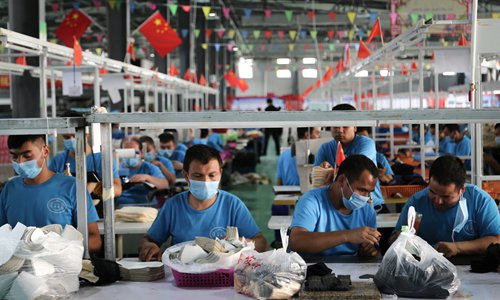