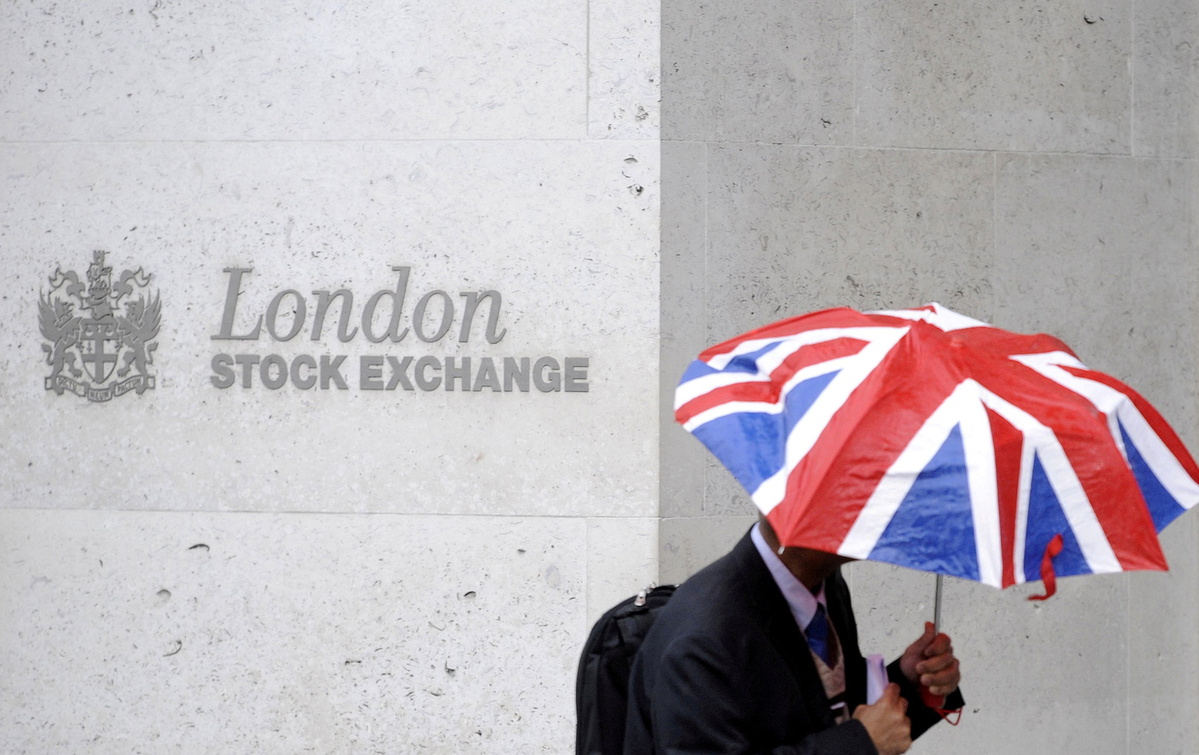 A worker shelters from the rain under a Union Flag umbrella as he passes the London Stock Exchange in London, Britain. [Photo/Agencies]

For Chinese companies seeking overseas financing, Europe has emerged as the preferred choice ahead of the United States this year and, for the first time, generated more funds, global financial data provider Dealogic said on Thursday.

Five Chinese companies have raised more than $2.1 billion from the Zurich and London stock exchanges by issuing global depository receipts－GDRs－so far this year.

In the same period, other Chinese companies raised less than $400 million from Wall Street, according to Dealogic.

Dong Dengxin, director of the Wuhan University of Science and Technology's Finance and Securities Institute, said it is totally plausible for Chinese companies to shift their focus for the time being as the US capital market has been increasingly politically oriented.

In this sense, the stock connect program linking the Chinese mainland bourses with the major European exchanges has provided a better financing channel for Chinese companies.

International investors in the European market are provided with more investment targets. Economic and trade ties between China and Europe will also be further strengthened, Dong said.

The stock connect program between the Shanghai Stock Exchange and the London bourse started in June 2019, using which A-share companies can issue GDRs in London. The program was expanded in February this year to include the Zurich, Frankfurt and Shenzhen exchanges.

Data from the public domain showed that at least 13 A-share companies have announced their plans to issue GDRs on major European exchanges so far this year.

Given the higher liquidity of the Zurich bourse, more A-share companies are expected to go in for GDRs here in the near future. The stock exchange also provides an alternative for Chinese companies as the audit dispute between China and the US is yet to be resolved, said Zhao.

Although detailed measures have not been released, the odds for the 200-plus US-listed Chinese companies to get delisted are now much lower, said Alvin Tse, eastern region Hong Kong offering leader for the capital market services group at Deloitte China.

While Chinese companies' interest in listing in the US started to recover in July, the overall initial public offerings and fundraising amounts have drastically contracted this year, according to Deloitte.

The professional services provider estimated that 13 Chinese companies will likely make their stock market debut in the US by the end of the third quarter of this year, down 68 percent year-on-year. Their total financing is projected to decline by 97 percent year-on-year to $450 million.