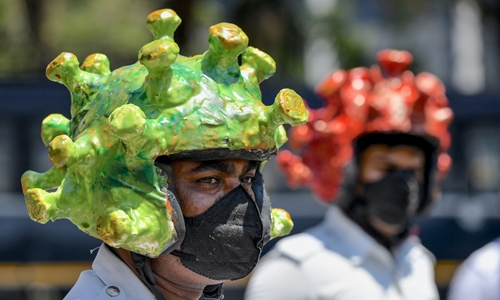 Traffic police personnel wearing coronavirus-themed helmets participate in a campaign to educate the public during a government-imposed nationwide lockdown as a preventive measure against the COVID-19 pandemic in Bangalore, India on Wednesday. (Photo: AFP)

Irrational calls from Indian netizens to boycott made-in-China goods are a tactic to shift the public's focus away from the South Asian country's ineffective work in containing COVID-19, and such a boycott will not help India reduce poverty or promote its modernization, experts said Wednesday.

Calls to boycott Chinese products have been on the rise among some Indians on social media in recent days as many claim that China didn't do well to contain the COVID-19 virus in its initial stage.

Trending topics like #BoycottChineseProducts and #BoycottTikTok can be found on Twitter, and many Indian users say they agree to a ban on the Chinese apps to take "revenge" against China.

"Since we are talking about boycotting Chinese products, let's start with the app that's being used by most of us … Tiktok," a Twitter user named Salil Tripathi wrote.

Launched in the Indian market in 2017, TikTok, the short video-sharing app developed by China-based Bytedance, has more than 200 million monthly active users in India, according to media reports.

The skewed opinions on Indian social media networks are intended to seek a "scapegoat" for the country's ineffectiveness in containing the COVID-19 outbreak, Lan Jianxue, deputy director of the Department for Asia-Pacific Studies at the China Institute of International Studies, told the Global Times on Wednesday.

It's meaningless to boycott made-in-China products, and such irrational behavior is not conducive to India's poverty reduction drive or its modernization process, according to Lan.

India is a major importer of Chinese products. In 2019, India imported such Chinese goods as mechanical, electrical and chemical products, base metals, plastics, rubber, textiles, furniture and toys, according to China's Ministry of Commerce.

"Trade between countries is based on the market demand, and cost-effective goods and services from China will help drive the modernization of India," said Lan.

"I found many 'boycott Chinese products' phrases online, but Indians around me don't show such an obvious tendency," a Chinese businessman in Bombay who prefers to be anonymous told the Global Times on Wednesday.

Chinese smartphone brands had more than a 70-percent market share in India in 2019, up from 60 percent a year earlier, according to data from Counterpoint Research.

"Instead of blaming China, it is better for India, which is in a 21-day lockdown, to conduct large-scale virus testing as soon as possible to contain the spread of the coronavirus," Lan noted.

India's confirmed COVID-19 cases stood at 5,356 as of press time, with 160 deaths, according to figures provided by John Hopkins University. But India has one of the world's lowest testing rates for the coronavirus - no more than 35 per 1 million people, the Xinhua News Agency said in a report on Tuesday.