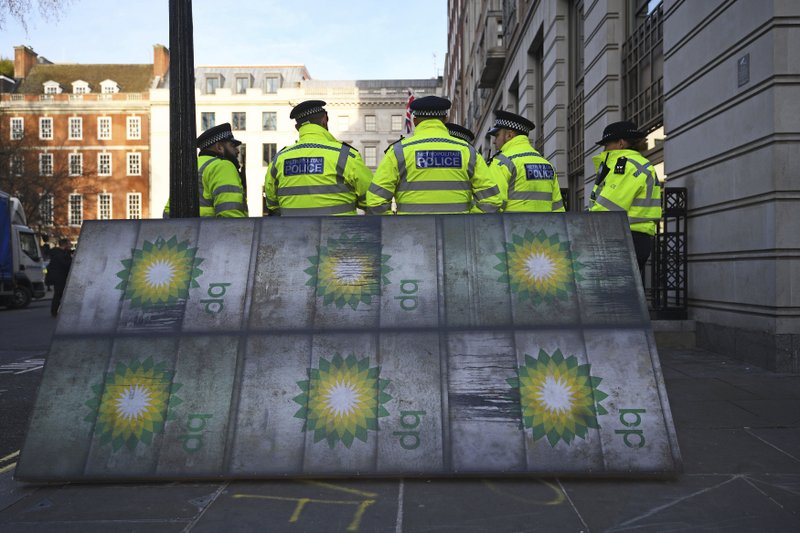 Energy producer BP said Wednesday it wants to eliminate or offset all carbon emissions from its operations and the oil and gas it sells to customers by 2050, an ambitious target born out of pressure to help combat climate change and keep making money.

London-based BP’s goals include becoming a net zero emitter in its own production of energy but also to reduce the carbon dioxide created by its customers as they use that energy - the bulk of emissions from the industry. Doing so would require not only a shift to cleaner energy sources but also coming up with new technologies to offset emissions or extract CO2 from the atmosphere.

As such, BP’s announcement was less of a detailed restructuring plan and more of a statement of intent from a company that is trying, like the wider energy industry, to ensure its long-term viability as the world decreases its reliance on fossil fuels in an effort to fight climate change.

“The world’s carbon budget is finite and running out fast; we need a rapid transition to net zero,’’ CEO Bernard Looney said in a statement. “We all want energy that is reliable and affordable, but that is no longer enough. It must also be cleaner.’’

In a presentation in London to climate scientists, investors and journalists, Looney acknowledged that targets and more specifics would follow. He compared the announcements, which come only two weeks into his tenure as CEO, as being like setting the destination in a GPS.

“We’re starting with a destination,”′ he said. “The details will come.″

Other energy companies have expressed similar ambitions as public awareness of climate change - and the energy industry’s role in emitting CO2 - has grown. Total of France said they were integrating climate into their strategy in 2016; Royal Dutch Shell outlined a “net carbon footprint ambition″ to halve emissions by 2050 while Repsol of Spain also made a similar net zero pledge to that of BP, David Elmes, an energy expert at Warwick Business School.

Elmes said BP’s announcement was significant in that it required deep change to the company’s business strategy rather than just reducing emissions from its current operations.

“While there are technologies that could keep us using fossil fuels without releasing the emissions (carbon capture, use and storage), it means BP has set a 30-year clock ticking to change much of what they do,″ he said.

Bob Ward, policy and communications director at the Grantham Research Institute on Climate Change and the Environment, called BP’s plans will put pressure on other oil companies to follow suit. But he said they don’t go far enough if the world is going to meet the goal of limiting global warming to 1.5 degrees Celsius over pre-industrial levels.

“The oil and gas industry can only survive the next few decades if they take ownership of the rapid transition to zero-emissions energy,″ Ward said. ”However, what is lacking from BP’s announcement is any indication of whether the company accepts that there will be a major reduction in the global demand for its hydrocarbon fuels.″

BP said it plans to help customers reduce their emissions by cutting in half the amount of greenhouse gases produced by the fuels it sells by 2050. The company said it will increase investment in ``low carbon businesses″ and put less money into oil and gas operations.

It will install monitoring equipment at all oil and gas processing plants by 2023 as it seeks to reduce the amount of methane the facilities release by 50%.

On a broader level, the company said it would work to promote policies that move society toward net-zero emissions. BP said it will stop “corporate reputation advertising″ and shift that spending toward promoting carbon reduction.

Image was nevertheless also taking center stage in Looney’s presentation, which began with a counter-intuitive video that featured angry climate protesters together with their tweets that portrayed BP as greedy, uncaring and unresponsive to the global climate emergency. Looney described how he had spent the months preparing for his job by listening to activists, politicians and scientists to better understand the crisis and ways forward.

He referenced people in the audience at the presentation. He singled out climate scientists by first name. He expressed contrition for failures in trust. It almost had the feel of a chat show at times, with Looney at one point asking a young person in the audience how he’d feel representing BP. The answer was decidedly mixed.

Looney pounded away at the message repeatedly: BP is going to change that. He said society is going to have to invest trillions of dollars “in replumbing and rewiring the world’s energy system″ and he wanted BP to be part of that change.

Elmes said BP was trying to portray itself as a different company that runs energy systems, not just one aspect of the system. For example, its heft can bring scale to low-carbon projects that might have only dreamed of such investment.

The difficulty is how to make sure that falls in line with making money. Looney was at pains to stress to investors that the company could make changes while still remaining strong financially.

“The tricky job,″ Elmes said, “”is how to turn the supertanker.″