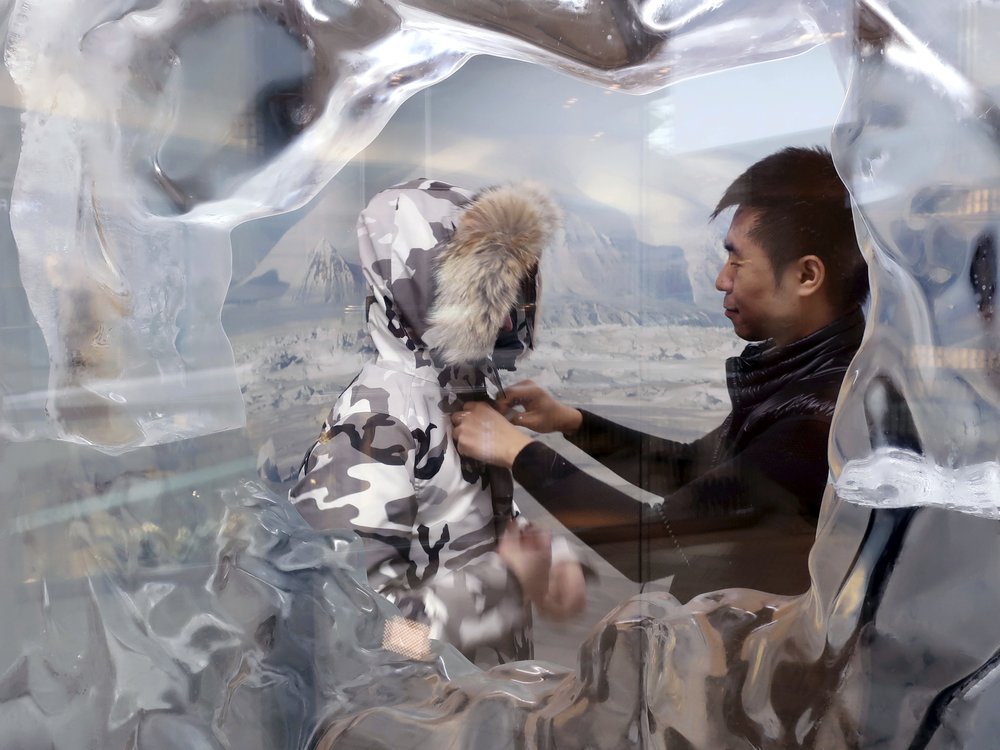 In this Nov. 2, 2018 photo, a sales associate is seen through a window display helping a customer try on a parka at the Mall at Short Hills in Short Hills, N.J. Like many malls, this shopping complex is offering more immersive shopping experiences. Outerwear brand Canada Goose unveiled a store with a “cold room” where customers can try on its $1,000 parkas in sub-zero temperatures. (Photo: AP)

Online retailers are getting physical.

A growing number of brands born on the internet are now opening brick-and-mortar stores and moving into the suburban malls once considered doomed as more Americans shopped online.

But they’re taking it even further by doubling-down on the tactile experience. Online mattress retailer Casper, for instance, is opening stores that allow customers to book naps and test out mattresses before buying. Indochino — the online tailor — decided to borrow from the old Savile Row model where customers can be measured face-to-face for custom suits.

“Online brands have embraced clicks-to-bricks,” said Faith Hope Consolo, chairman of Prudential Douglas Elliman’s retail division. “Shoppers love to touch, interact and try on in person and malls are upping the ante by offering immersive experiences that are exciting and memorable.”

The store openings mark a major shift for formerly online-only brands that just a few years ago believed they didn’t need a physical presence to generate robust sales growth.

Digital natives are now finding that the cost of acquiring new customers online is soaring as competition for eyeballs has increased the cost of online ads on Google and other platforms. At the same time, opening a store has become more affordable as higher mall vacancies have prompted landlords to offer flexible leases and other perks. It can be 10 times more expensive to acquire a new customer online as it is with a physical store, said Jim Ward, who heads up recruiting for online brands for mall owner CBL.

There are now roughly 600 stores across the country from these online natives, according to Green Street Advisors, a real estate research firm. Bonobos, which now has 60 stores and sells men’s clothing, plans to have 100 by 2020. Online eyewear retailer Warby Parker, which opened its first store in 2013, will have nearly 100 stores by year-end.

Others are following suit. Casper plans to have about 200 stores in the next two to three years, up from the current 20. And Fabletics, an active sportswear brand co-founded by celebrity Kate Hudson, aims to quadruple the number to 100.

For a brand that’s less than 10 years old, new store openings mean a 45 percent increase on average in online traffic, says a recent survey by International Council of Shopping Centers.

But not every mall is benefiting from the shift by online retailers. Digital brands are clustering in top-tier shopping centers, driving an increasingly large gap between the poshest of malls and those struggling to fill vacancies. While many online brands are planting stores in tourist destinations around New York and Los Angeles, they’re also launching stores in Oklahoma City and Birmingham, Alabama.

“We’re not considering anything outside of the premiere malls,” Dave Gilboa, co-founder and co-CEO of Warby Parker.

The physical stores often provide a level of convenience that the web lacks.

At the upscale Mall at Short Hills in New Jersey, pre-dental college student Calev Glick, 20, stopped by Indochino on a recent Friday to get measured for a suit for synagogue. He considers himself an “Amazon guy” because he doesn’t have much time to go out shopping.

“At a traditional department store, you kind of hope it fits,” Glick said. “Here, I am getting all the help I need. I am going to be here two hours and I’m going to get it shipped to my house.”

Digital natives still account for a tiny fraction of overall mall tenants, yet they could soon have a “material” effect on mall revenues, says Bill Taubman, chief operating officer of mall operator and owner Taubman Centers.

Ron Harries, head of retail for Fabletics, said that opening physical stores wasn’t in the company’s original plan in late 2014, but it realized that a physical location could acquire customers more efficiently.

“This gives you an opportunity to reach customers who are not shopping online,” Harries said.

In fact, Fabletics enjoys a two-and-a-half times increase in revenue from its most active customers within a 30-mile radius of a Fabletics store. Customers who live near a store are more likely to return an online purchase at that store, Harries said. That creates more opportunity for an extra sale. The sportswear company also electronically tags items in its stores and tracks what went in and out of the fitting room so it can learn which items shoppers were most likely to try-on but not purchase.

Online retailers are also finding that they can provide a fuller, more immersive set of customer services at physical stores than they could on web browsers.

At Indochino, customers first get measured by a stylist. Then they inspect 200 different fabrics in suits and select different styles before having it shipped for free two to three weeks after purchase. The price of a suit is about $400 to $500, and any extra tailoring is free of charge.

“We want customers to feel that they created a one-of-a-kind garment that they can’t get anywhere else,” said Drew Green, CEO of Indochino, noting he’s pulling customers once loyal to a traditional brand at the mall. “I believe we are providing a disruptive, alternative experience.”