A number of companies have recently launched their latest products in the Chinese market, showing that potential for consumption remains despite the ongoing epidemic. 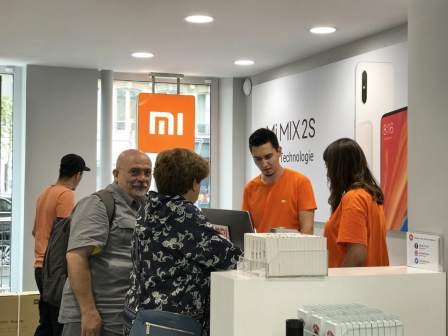 One of them was electronics giant Xiaomi, which introduced its newest flagship smartphone model at an event on online shopping website Taobao’s live-broadcasting platform on Feb. 13. The phone received 26,000 orders on its flagship store on Taobao just a few days after its launch.

Expectations for smart phone shipments in the domestic market were lowered in the first quarter of the year because of the pneumonia outbreak, making it necessary to launch new products to give the industry a boost, said a manager with Xiaomi.

Express delivery services are also expected to stimulate online consumption, as the industry had resumed more than 40 percent of its normal production capacity by Feb. 18, with over 2 million deliverymen going back to work, according to the State Post Bureau.

Clothing brands such as H&M and Zara have also launched new spring collections recently, showing confidence in the Chinese market.

Although consumption has seen relatively slow growth as a result of the pneumonia outbreak, experts pointed out that there is still long-term potential in Chinese markets.

Consumer demand has not disappeared, but has merely been delayed by the pneumonia outbreak, said Zhao Ping, director of the international trade research department at the Academy of China Council for the Promotion of International Trade, adding that consumption will return to normal growth three to six months after the epidemic.