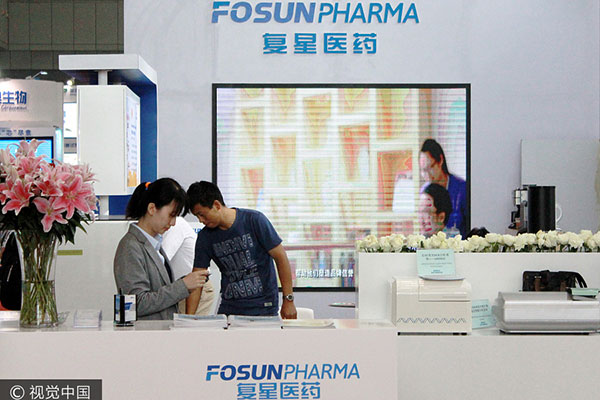 Shanghai Fosun Pharmaceutical Group Co Ltd announced on Sunday its experimental drug ORIN1001 has received fast-track designation from the US Food and Drug Administration for the treatment of patients with relapsed, refractory and metastatic breast cancer, including triple-negative breast cancer, or TNBC.

ORIN1001 is an investigational first-in-class small molecule drug that has a novel molecular target, novel mechanism of action and a novel chemical structural class and identity. It has been independently developed by Fosun Orinove, a subsidiary of Fosun Pharma.

The new drug is for the treatment of advanced solid tumors and relapsed refractory metastatic breast cancer. As of last month, Fosun Pharma had invested 45.47 million yuan ($6.57 million) in the drug.

The company will accelerate ORIN1001 development in the near future and reach the global market expeditiously, according to Fosun Orinove's CEO Zeng Qingping.

Fast track is a process designed to facilitate development and expedite the review of drugs to treat serious or life-threatening diseases or conditions. A remedy that receives fast track designation may be eligible for frequent communication with the FDA, priority review, potential accelerated approval according to data and rolling submission, which allows a company to submit completed sections of its Biologic License Application or New Drug Application for review by the FDA, rather than waiting until every section of the NDA is completed before the entire application can be submitted.

Breast cancer is one of the major cancers affecting women. Triple-negative breast cancer, diagnosed more frequently in younger and premenopausal women under 40, accounts for about 15 to 25 percent of all breast cancer in China according to a study published in the International Journal of Breast Cancer in 2017.

Because of the high heterogeneity of its tumor cells, TNBC has very high invasiveness, recurrence rate and metastasis, and lacks an effective targeted therapy.

In recent years, Fosun Pharma has expanded investment on innovation and oncology research, and worked on small molecular innovative drugs, biologics and cellular immunotherapy. It owns a rich research pipeline, with more than 30 oncology projects at the clinical development stage.

In February 2019 its independent drug HLX01, under the trademark Hanlikang — a reference to Roche's Rituxan — was approved by the National Medical Products Administration as the first biosimilar product in China. The drug was developed by Henlius, Fosun Pharma's biologics platform,