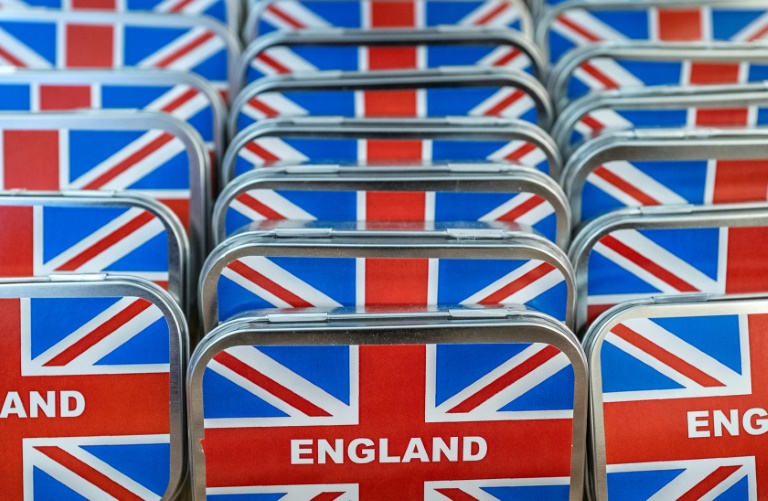 Dale Carr and her husband Robin have been selling British goods to homesick expats since 1996 (Photo: AFP)

As the United Kingdom grapples with its Brexit drama, the uncertainty around its decision to leave the EU persuaded Dale Carr to close down her Berlin shop selling British goods.

The 67-year-old from Sheffield and her husband Robin in 1996 opened "Broken English", a shop selling British goods to homesick expats and Germans with a taste for UK treats in the trendy district of Kreuzberg.

But things changed in June 2016 when British voters opted to pull out of the EU and the couple, unsure about the future, decided to close their business by the end of May this year.

"We decided we would close, because of the uncertainty -- not knowing if we could carry on," said Carr, who also shut a second Broken English shop in west Berlin last year.

Carr and her husband, who first came to Berlin in 1978, will retire, leaving her two employees out of work, unless a buyer is found.

Visiting customers -- stocking up on Stilton, chocolate biscuits and chutney -- said they were dismayed by the UK's decision to leave the EU.

"I think it's a joke, a bad joke," said German Manfred Denker, clutching a box of biscuits.

"After Brexit, what is something like a jar of English marmalade going to cost?"

In the wake of the referendum result, Carr and her husband submitted their paperwork for German citizenship -- "it was a no brainer," she said -- and the process was finalised in the middle of 2017.

"I was very grateful to get German citizenship," she admitted. "That was a weight off my shoulders and I didn't realise how stressful it had been until we got our certificates."

After the referendum result, the shop became an unofficial drop-in centre for other Brits working in Berlin, worried how Brexit would affect their rights, and eager to apply for German citizenship.

"It (Brexit) has damaged a lot of people, it's affected all of us and it will take a long time for that to disappear," she said.

"It has divided people," said Carr, who says she has lost friends who voted "Leave".

Carr says business is currently booming, which she puts down to customers stockpiling goods and Easter approaching.

Up in Hamburg, Robert Berridge, who owns the "British Food and Gourmet", has seen sales of foodstuffs steadily drop away since 2016.

"A lot of customers have stopped buying, some are annoyed (by Brexit) and don't want to be reminded of home," said the 60-year-old from Ascot who moved to Germany in 1981 and started the business in 1985.

Using previous Christmases as a yardstick, Berridge says business has steadily declined from 26,000 euros ($29,000) turnover for the last quarter of 2014 to 12,000 euros for the same period last year.

"I think it's because of Brexit, I have the feeling some are boycotting British goods -- annoyed at the decision," said Berridge, who was granted German citizenship in January.

He says he will probably stop importing British goods, focusing instead on selling second-hand English books, put off by the potential extra paperwork and customs taxes.

Berridge feels his business is "on the marginal edges, where the pain sets in first" and unable to absorb potential extra costs.

There are no such survival worries for Cologne's "The English Shop", founded in 1995.

However, Brexit has caused a few concerns for some of the 40 employees at the flagship store and a separate shop in Bonn.

"We are very, very, very unhappy with Brexit," said Anna-Maria Boehm, in charge of the shop's marketing.

"We have a lot of experience of importing goods from the UK and a hard Brexit will just mean more paperwork -- every bar of chocolate or bag of crisps will have to clear customs.

"The main impact so far has been on staff - Brexit has been a huge issue with people applying for dual citizenship or getting married to make sure they can stay."

However, Brits in Germany will always have somewhere to get their tea -- especially as the shop has an online store.

"There will always be a little island of the UK in Cologne," added Boehm.