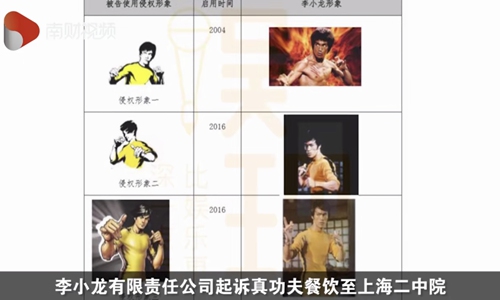 Chinese fast food chain Real Kung Fu is being sued for 210 million yuan ($30 million) by the daughter of Bruce Lee, who claims the company has used an image resembling her father for 15 years without authorization.

The suit also requires the company publish a clarification in the media for 90 consecutive days saying its logo has nothing to do with Bruce Lee. Lee filed suit at Shanghai No.2 Intermediate People's Court, Beijing Daily reported on Thursday.

Real Kung Fu said Thursday it will fight the lawsuit as it received authorization to use the image.

Established in 1990, the company has over 600 chain stores across China.

The company said that they have been using the trademark for 15 years after approval by the trademark office of the national intellectual property administration.

"Our trademark stirred an argument many years ago over copyright infringement, but our trademark has not been determined to be an infringement nor have we been asked to revoke the logo by administrative or judicial bodies," the company said via Twitter-like Sina Weibo account on Thursday.

The topic "Bruce Lee's daughter sues Real Kung Fu" had been viewed more than 430 million times as of Thursday night.

Real Kung Fu appeared to have less support from internet users than the kung fu master.

Several online polls found a majority of respondents believed the fast food chain was intentionally using an image of Bruce Lee and should stop.

Liu Junhai, a law professor at Renmin University of China in Beijing, told the Global Times that it's inapproriate to define whether the fast food company has infringed Bruce Lee's copyright as the case has not been tried.

Both sides have to list true and effective evidence in court, Liu said.

The attention for the case showed Chinese people's awareness of intellectural property rights (IPR) had significantly improved in recent years, he said.

The general offices of the Communist Party of China (CPC) Central Committee and the State Council jointly issued a directive calling for intensified protection of intellectual property rights in November.