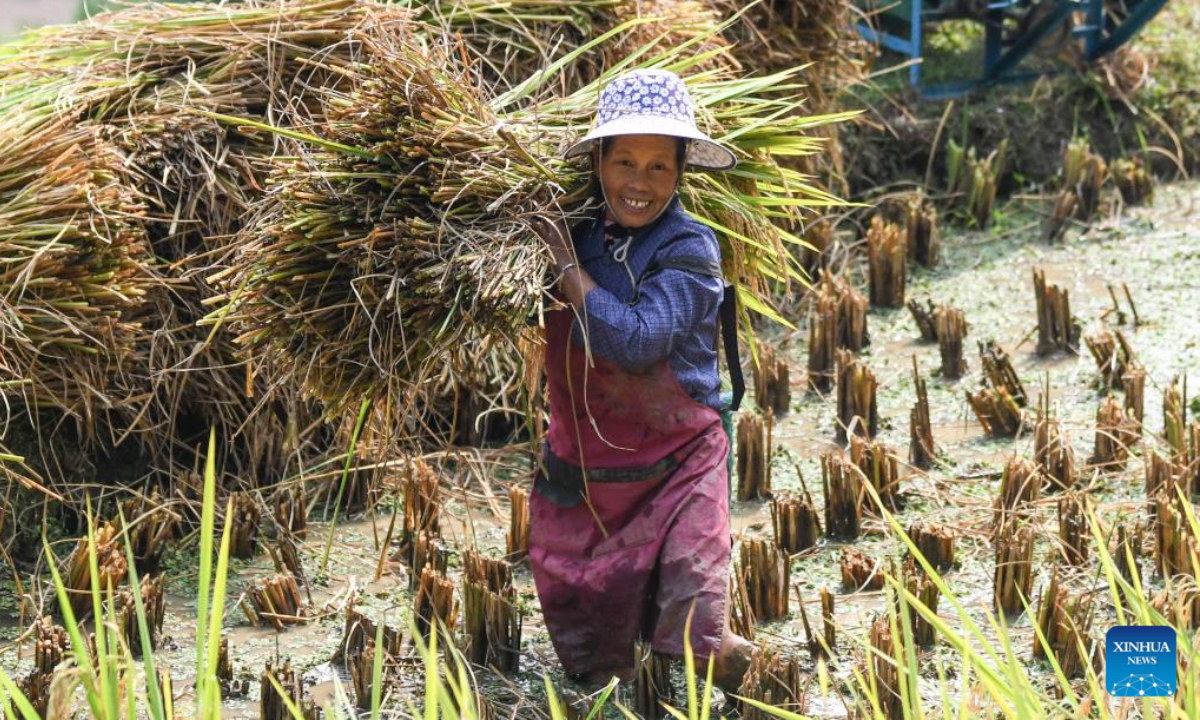 A bumper harvest can be expected in China for 2022, with grain output estimated at above 1.3 trillion jin (650 billion kilograms), despite the triple challenge of natural disasters, COVID epidemic and global commodities price fluctuations, an official with China's National Development and Reform Commission, China's top economic planner, said on Wednesday.

China has seen continuous strong grain harvests in recent years, with ample food supply and stable food market, in contrast to the wild fluctuation in the international grain market, Wu Xiao, an NDRC official on rural economy, told a press conference in Beijing on Wednesday.

"Now that summer grain has been harvested and the autumn harvest is expected to be carried out in large scale, a bumper harvest can be expected this year, and we have confidence the annual target of realizing grain output at 1.3 trillion jin can be achieved," Wu said.

Wu said the country cushioned the impact of a series of natural disasters, including the drought in summer, and the impact of the COVID-19 epidemic. China also coped with the uncertainties seen in global grain trade and fluctuating commodity prices in wake of the Russia-Ukraine conflict by beefing up the domestic resilience in the production, storage and sales of grain.

Over 95 percent of the farming areas are planted using domestic seeds, and the mechanization rate for the farming of wheat, corn and rice has exceeded 97 percent, 90 percent and 85 percent, respectively.

In 2021 and 2022, one-time subsidies of 60 billion yuan ($8.31 billion) were handed out to farmers to help them cope with rising prices for agricultural production materials.

International grain price has seen ups and downs in 2022.

The closely-watched food price index compiled by the Food and Agriculture Organization of the United Nations averaged 138 points in August, down 2.7 percentage points from July, marking the fifth consecutive monthly decline since hitting all-time highs earlier in the year. The index tracks monthly changes in the international prices of a basket of commonly-traded food commodities.