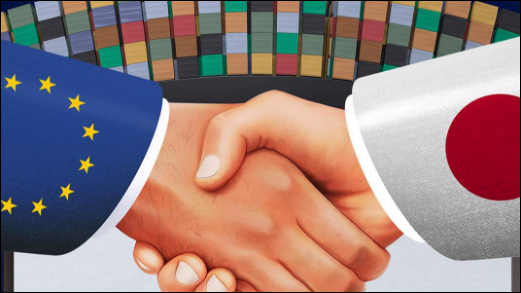 Business circles within the European Union (EU) have welcomed the EU-Japan free trade agreement which was signed on Tuesday, hailing it as a "clear signal" of resisting protectionism.

The deal between Japan and the EU will lead to the creation of one of the world's largest economic blocs, which is expected to constitute roughly 30 percent of the globes gross domestic product (GDP).

"The agreement is a milestone in international trade, at a time when rules-based trade is under pressure. This agreement will liberalize up to 99 percent of all bilateral trade between two regions that cover a quarter of the world's gross domestic product," said Pierre Gattaz, President of BusinessEurope.

"It will open up many economic opportunities and it will be a clear signal to the world, that the EU is a strong proponent of trade liberalization and a defender of rules-based trade," Gattaz added.

DIGITALEUROPE, which represents the digital technology industry in Europe, also welcomed the deal.

"The EU and Japan are sending a strong signal in favor of free trade around the world," said Cecilia Bonefeld-Dahl, Director General of DIGITALEUROPE.

"We are grateful to the Japanese government and to the European Commission for their efforts in improving the global business environment, as the agreement is meant to trigger a long-term GDP increase for the EU estimated to +0.76 percent and an increase of exports by + 34 percent for the EU," she added.

The EU agri-food chain also welcomed and highlighted the significant opportunities that the deal will bring for European exports, especially those of agricultural products including, food and drinks.

"The EU agri-food chain partners see this agreement as an important step towards reinforcing the relations with one of our key trade partners, based on a shared commitment to progressive rules-based trade liberalization and cooperation to achieve mutual benefits," read a joint statement issued by EU agri-food chain (Copa and Cogeca, CELCAA and FoodDrinkEurope).

The European Council leaders have also indicated that the long-awaited deal is a way countering US attacks against free trade and the rules-based international order.

"This is an act of enormous strategic importance for the rules-based international order, at a time when some are questioning this order. We are sending a clear message that we stand together against protectionism," said European Council President Donald Tusk in a press conference on Tuesday after the deal was signed.

"With the signing of the Economic Partnership Agreement with Japan, we are making a statement about the future of free and fair trade," said the European Commission President Jean-Claude Juncker.

"The agreement puts fairness and values at its core. There is no protection in protectionism, and there is no unity where there is unilateralism," added Juncker.